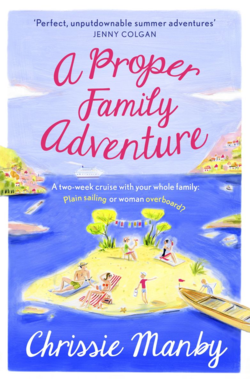 It’s Grandad Bill’s 86th birthday and the grandchildren have pooled their pocket money to buy him a lottery ticket. When he wins a substantial amount, he decides the whole family would benefit from a two week Mediterranean cruise. There’s rumours that Chelsea’s boyfriend, who has also been invited along with his young daughter, might be preparing to propose but they seem to have been arguing a lot recently so maybe she shouldn’t get her hopes up. Unfortunately, one of Bill’s granddaughters won’t be able to travel due to her ongoing recovery after a kidney transplant. However, among the passengers is frail and vulnerable Jane, a lady still recovering from the sudden shock of her fiancé, a man whose organs were donated.

The premise of this novel was exciting and I looked forward to reaching it in my to-be-read pile. The novel, from what I can gather, is the third in a series featuring the Benson family and I couldn’t help but feel completely overwhelmed throughout the first quarter. There are so many characters to get to know and some of them more important to the plot than others. It felt that just as I had been introduced to one set, there was another to add and I kept getting really confused as to who was who. There are also lots of sections where the action is dependent on knowledge from the previous books so I felt like I was being a bit bombarded with quick recaps and memories. I was looking forward to knowing more about Izzy’s treatment and how she was coping with her mixed emotions of guilt and euphoria at being alive but this was brushed over quickly and she became a peripheral character.

Once I had worked out who was related in what way to who, I started to enjoy the novel much more. I especially liked Jane’s best friend, Kirsty, who convinces her to go on her honeymoon despite losing her fiancé six months earlier. She’s patient and supportive where most people have tired of Jane’s grieving and struggle to connect with the world. I liked that Kirsty became a bit more prominent towards the end.

Overall, the novel is well-written and good fun. I imagine this would have been an amazing read had I already been acquainted with the Bensons. Unfortunately, I spent a bit too much time trying to keep with what had happened earlier.