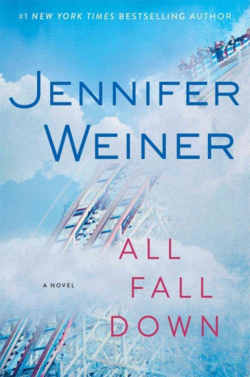 Allison Weiss is a successful woman. Her marriage looks stable though, with her husband always occupied by his stressful job, she almost single-handedly raises her sensitive yet otherwise healthy young daughter Ellie. On top of that she is a mummy blogger, whose blogs have become so popular that despite working from home with the intention to focus on her family, she now easily clocks up 60 hours or more a week to keep up with all the topics she's asked to cover, respond to comments and even give interviews to the national press. On top of it all her father's health has recently started to deteriorate and her mother, used to being taken care of by her own husband, can't handle the sudden responsibility, which leaves Allison to pick up the pieces.

On the outside Allison looks strong and able, as if she can take the worries of the entire world on her shoulders, but the amount of work she has taken on – both in her work and home life – and the stress that comes with such a busy schedule, has become too much for her. And the only way she can get through her days is by starting to pop pills from the moment she opens her eyes. At first they're ones prescribed to her by her own doctor for an old injury, but as the pill intake increases, Allison takes more drastic measures to ensure she has a supply at all times. While her family and friends initially seem blind to the changes in Allison, when a teacher at school takes her car keys away from her because she deems her unable to drive, the fact that she almost put her own child at risk serves as a wake-up call to both Allison and her family.

Coincidentally this is the second women's fiction novel about addiction I have read in as many weeks, yet despite touching upon some of the same issues facing the main character, the story is vastly different in all other aspects. Instead of exploring the aftermath, which the other book I read did, we meet Allison at the start of her journey from the very first moment she realises that perhaps her steadily growing pill intake has become a problem beyond her own control, even though she is struggling to admit both to herself and her loved ones that she needs help.

This may sound morbid, but I've always been fascinated by the road to addiction (and recovery) in fiction – from The Basketball Diaries to Bright Lights, Big City, and everything in between. To see it become a more prominent topic in women's fiction now as well is a good thing as many people, including otherwise perfectly capable women such as Allison, face problems with drugs and alcohol in today's hectic society. And by portraying women just like them in these stories it will hopefully help them realise that they are not alone; admitting that there is an issue and seeking help is nothing to be ashamed of.

The gradual change in Allison as her addiction became worse was eerily realistic and my heart really went out to her, because it was evident that all she wanted to do was help everyone around her, but it was simply too much for one person. I was particularly compelled by the chapters where Allison met people who were struggling just like she was. Their stories were extreme and heart-breaking were also a much-needed eye-opener to Allison. She needed to see and hear how bad it could truly get, as it served as a wake-up call to herself that she had to stop now before it was too late and she would lose everything she cared so deeply about. My only disappointment was that when to me the novel went from a good story to an exceptional one, that it abruptly finished. As I had become so attached to Allison, I would have liked to have read about her road to recovery until the very end.

The topic of addiction and the terrible consequences it can lead to was not glossed over, but it was handled very sensibly in All Fall Down. Author Jennifer Weiner could so easily have been judgmental or stereotypical in her portrayal of addiction, but neither were the case. Instead the novel served as brutal reminder that these horrible things can happen to people from all walks of life.