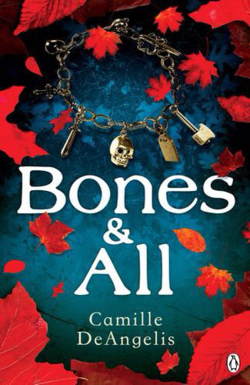 From a young age, Maren has known she isn’t like other people. She has an urge she can’t control; the urge to eat people. Each time the urge overtakes Maren, she and her mother pack up their things and run, starting all over again in a new town. The day after her sixteenth birthday, Maren finds herself alone. Her mother has left, leaving only Maren’s birth certificate and an envelope of money.

Maren decides to find her father, a man she doesn’t remember ever meeting. She knows nothing about her father, only his name and place of birth stated on her birth certificate. Maren is used to travelling light, so with her backpack and the envelope of money, she sets off to find her father – and maybe even learn a few things about herself.

I was a little reluctant to start reading Bones & All. Being squeamish, I was worried that a book about cannibalism was going to be far too gory for my weak stomach, but thankfully the book isn’t quite as gruesome as I thought it was going to be. While there are some stomach-churning scenes, it wasn’t graphic enough to stop me reading.

As I read, I found that the book, cannibalism aside, was quite a good read. I liked the writing and the flow of the book and Maren was an engaging character. I’d have liked her even more if it wasn’t for her people-eating, but as this was the whole premise of the book, it had to be. The pace really picked up towards the end of the book, which had me turning the pages to find out what would happen, and there were a few surprises that I wasn’t expecting.

While I did enjoy the writing, there were a couple of niggles that distracted me. First of all, Maren is very young when she eats her first victim. From my calculations, Maren was between the ages of one and two when she killed and ate her babysitter, and I can’t help finding this ludicrous. I also found the volume of what Maren ate unbelievable too as she eats entire people in one go (bones and all). While you have to take some things in fiction with a pinch of salt and go with them, this bothered me throughout the book as it happens frequently.

I was surprised by how much I did enjoy the book after my initial revelations. While the subject matter is not to my taste, I’d definitely read more from the author in the future.