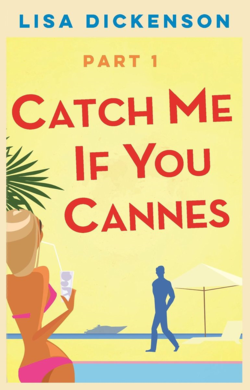 I fell in love with Lisa Dickenson's brilliant novels when I read her hilarious You Had Me At Merlot last summer, followed by The Twelve Dates of Christmas in the lead up to the festive season. Both started out as digital serials, but I am glad that I read them in full as it would've been agony to have to wait between each amazing part for the next instalment to come out. Lisa is one of those authors that completely pulls her readers into the story and doesn't let them go until that final page, and with Catch Me If You Cannes she has waved her magic typing fingers again.

Perfectly timed for the summer that is upon us (or, you know, what passes for summer in Britain), Lisa's latest novel, as the title may give away, is set amid the heat and excitement of Cannes, which is brimming with celebrities for the annual film festival.

Our main protagonist, Jess, is neither a famous face nor one of the rich jet-setters that harbour their yachts ashore of the glistering French town, but luckily for her she has a journalist friend who is invited to spend some time in a not-very-glamorous hotel that is still close enough to all the film festival action. Not that Bryony has much sway with the organisers, mind, as the gossip magazine she works for isn't exactly a well-respected or even known news outlet, but it gets them to the coastal town and Jess figures that is enough.

After all, the place is awash with glamorous people and the odds of bumping into a celebrity – literally preferably – are surely are high?

I know I have mentioned this before, but as it was more evident than ever it bears repeating: Lisa is unbelievably funny! As soon as I dug into the novel she had me snorting at her hilarious and wacky imagination and the crazy escapades her main character managed to get herself into. Only a few pages in there was a scene that I found too good not to share, so I Tweeted and Instagrammed the quote (as you do), but I soon realised I probably should not do that or I would be sharing the whole book digitally as there was something laugh-out-loud funny on practically every single page.

Jess was a wonderfully likeable main character and, even if her decisions weren't always the brightest ones, as a reader you can't help but love her and root for her – especially in the men department. Because as if celebrities and sunshine galore isn't enough, there are also a few very swoon-worthy men (who I imagined to be topless for the duration of the novel, even if it didn't fit the story entirely), some unexpected intrigue and excitement and generous lashings of Nutella. Yes, Nutella takes centre stage within Catch Me If You Cannes. I've had toast with this scrumptious hazelnut-chocolate spread for breakfast for the past two weeks and I only just realised where this sudden craving has come from!

Catch Me If You Cannes is a stonkingly good summer read and one that needs to make its way onto your kindle for the holiday season.

On a side note, I read the novel when it was 20 degrees weather in London…in April. Coincidence? I think not. Lisa Dickenson is clearly magic and can bring summer to England with the sheer power of her writing pen*.

*Reading this book does not guarantee any actual sunshine, but there will be imaginary rays aplenty as you'll be transported to a tropical location that may or may not be in a universe where gay Sherlock and gay Moriarty are an actual thing.

Catch Me If You Cannes is currently available in four bite-sized digital parts and a full digital version and paperback will hopefully follow in the not too distant future!