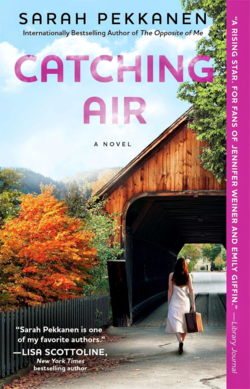 Kira and Peter are offered the chance to change their lives and move from their stressful situation in Florida to Vermont to open a B&B with Peter’s brother Rand and his wife Alyssa. When they accept and move into the big B&B with ski slopes on their doorstep, they think this is a dream come true. No more 9-5 stresses and a chance to be their own bosses – what could possibly go wrong? When they arrive, they begin to designate rooms and at first things seem to be going smoothly.

When a young woman requests that her wedding take place at the B&B, however, things seem to start unravelling out of control. Alyssa never thought she and Rand could have children and suddenly they find they have been accepted at an adoption agency to adopt a little girl. Soon after this, they also find out that Alyssa is actually pregnant! For health reasons, Alyssa has to be kept on bed rest leaving all the work for Kira.

Meanwhile a mysterious woman called Dawn ends up staying with them in exchange for work and, although she harbours a secret, she helps Kira through the rough times at the B&B. On top of this there are unspoken problems between the brothers that finally reach boiling point. Will the family and Dawn be able to work through all their problems in time to save their dream of the B&B and their relationships?

This book was really easy to get into. The characters really stand out and the storyline is interesting, but not overly complicated, so I never felt bored or able to predict exactly what was going to happen. The writing is very descriptive and sets the tone for each scene; I especially liked the descriptive snow scenes and parts of the book describing the food and flavours as Kira experiments with cooking for her guests.

The characters are really well written and I felt most drawn to Alyssa and her total adoration of her soon-to-be adoptive child. When she realises she is pregnant and states she will never choose between the two children, I felt nothing but respect for her and her values in life. I thought she was exceptional. She is also the character that allows Dawn in to their world, which made her character even more loveable.

Peter was also a great character – the only one that Dawn could properly confide in and he doesn’t judge her for her mistakes. He simply offers her a helping hand. Dawn is another good personality in the book, constantly wresting with the right thing to do. I truly felt sorry for her situation and her constant running away from something she didn’t mean to happen.

Kira’s character tended to stress me out, always taking on too much without ever speaking out. Rand was similar in that he tended to go off a lot on his own. I understood and appreciated the secret he had been making for Alyssa and the children and thought it was a very sweet gesture, but I just found his behaviour infuriating. These feelings made me want to read on though, to watch the characters evolve and become better and happier people.

The only negatives I found in the book involve incomplete storylines such as the breadknife that Dawn steals, or when Rand is constantly suspected of doing ‘something’ with the girls at the bachelorette party. These issues are left open and I personally found that a little infuriating, but then maybe that’s the whole point.

I think this book would be enjoyed by any age range, since it is about love, life, injustice and family. I really enjoyed it and would definitely recommend it.