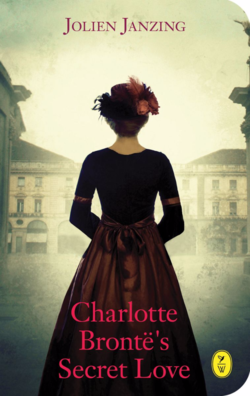 Did you know that Charlotte and Emily Bronte spent some time studying languages in Brussels? And that Charlotte had a secret love affair there that inspired her to write? Jolien Janzing’s novel is based on these true events as Charlotte searches for adventure and falls in love with the husband of the headteacher of their school, as Emily pines for the moors and home. As well as Charlotte and Emily, we also meet Henriette Claret, who has big plans for her beautiful daughter Arcadie.

I will freely admit that I don’t know enough about the Brontes and haven’t read all of their books, so I had no idea about this episode in Charlotte’s life (it isn’t mentioned in Jasper Fforde’s Eyre Affair, my only other Bronte-related point of reference), although having now read about it, Jane Eyre makes a whole lot more sense!

This book contains a really unusual writing style, which I don’t think is because it has been translated from the Dutch original. It talks directly to the reader in a way that I don’t remember having come across recently. I thought this really worked to help smooth out the jumps between two sets of characters who don’t seem to be particularly linked for quite a long time.

Once I got into the flow of this I really enjoyed it – and it’s made me think that I need to go back and read more of the Bronte sisters’ books. I don’t know if it would work for people who are massive Bronte fans – but for me it was an enjoyable and informative read, which created believable fictional versions of the real-life sisters.