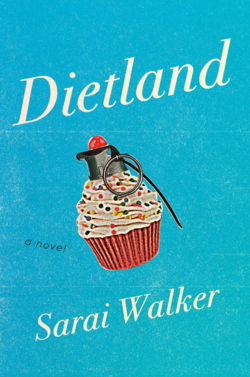 Plum Kettle is fat. She hates the word, the world and all the people who stare at her for not fitting into the realms of super-skinny-supermodel. Plum works as an agony aunt for teenage girls, answering their emails about angst, self-harm and relationships. Working from home (well mostly in the local café), she uses the voice and appearance of Kitty, a thin pretty woman who has all the right answers.

Plum dreams of a future after her weight loss surgery. She dreams about who she will be and what she will look like in her new form of Alicia. She buys and hoards clothes in sizes too small ready for the ‘thin’ girl of her future, when her life will really begin.

One day Plum thinks she is being followed by a woman in combat boots and bright tights. Once this incident occurs her world begins to change around her and she is forced to confront what she really wants and has in life, as well as what may be if she follows through with the surgery.

With the help of Verena, Plum is welcomed into Calliope House, the home of women also challenging society’s shallow concepts of how women should ‘look’. Meanwhile, there is another group exacting revenge on those who have mistreated women, and Plum is caught in the middle of it all whilst, at the same time, undertaking a series of difficult challenges set out by Verena.

As the story unfolds, Plum finally confronts the real world of beauty and what sacrifices women make to fit this mould carved out by a media frenzied world.

Dietland had me at the word ‘fat’. I really felt empowered by the use of the word throughout the book, because it isn’t something anyone should be afraid of. It also counteracts the word ‘thin’, which seems to have positive connotations, even though it isn’t exactly healthy when portrayed in the media. The quest for size zero and beyond seems to be something that has infected everyone in the western world.

Plum is the perfect antidote to this over-infatuated, weight-obsessed world, and even though she initially resists her true form, when she begins to accept who she is and that she loves herself, her empowered self is badass. This book is about things I and the women in my life are passionate about – gender, weight, beauty and fitting in – it has it all!

I adored the hijacking of the newspapers (which were usually filled with naked women) suddenly being filled with naked men and shocking society to its core. I felt empowered by this, a subject that is current and will forever be questioned by those who believe in gender equality and the exploitation of the female form.

Plum turns out to be a pretty tough lady, and even when she is shoplifting I adored her – she was being real and unafraid, she was taking risks and discovering herself. Her challenges were hard to read – I felt uncomfortable with her blind dates, yet there was something soul-shifting about them, particularly the date with Alexander, a blind man. Plum took on the role of Alicia and told him all about her weight loss, her scars and that her naked body was no longer considered ‘normal’. This, for me, was a huge turning point in the story.

This book is honest, shocking and it challenges the world we live in, the world we accept as ‘normal’, and it makes you really think. This is a book that should be read by anyone who cares about living in a world where women are constantly compared to one another.

An essential read for all, this book confronts the things we, thanks to the media, accept as beautiful, challenges the word ‘thin’ and utterly and beautifully embraces the fabulous world of just quite simply being you.