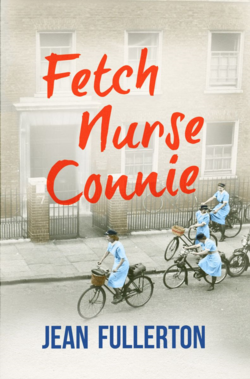 Connie is a district nurse in the East End. The war’s just ended and she’s organising her wedding whilst waiting for her fiancé to come home. But when he arrives, things aren’t as she expected and she has to start building a new future.

I seem to have been reading a lot of books recently that are set in or around the Second World War and this has a few of things going for it. For a start Connie and her friends are not the cookie cutter WWII characters that you sometimes encounter. That’s not to say that this is all gloom and grit – because it’s not – it’s still a rosy-tinted view of the past, it’s just the lens isn’t completely smeared with Vaseline! Jean Fullerton has also clearly done a lot of research into what it was like to be a post-war pre-NHS district nurse which helps to create the the pre-NHS world for those of us that don’t remember. However sometimes the explanations and the detail do take you out of the narrative a little bit.

I did have a few problems with Connie – sometimes I wanted to give her a slap and tell her to get her act together, but she didn’t annoy me so much that I couldn’t enjoy the book. Fetch Nurse Connie does run alongside two of Fullerton’s previous novels – telling the story of Milly (one of Connie’s friends) who is a fellow district nurse – and although I haven’t read them, I suspect this may explain Connie’s actions a bit – if she started off as a secondary character whose actions are now being fleshed out.

This is still a good read though – with characters that don’t always fall into the stereotypes that you expect and with a slightly less cosy take on the era than some similar books.