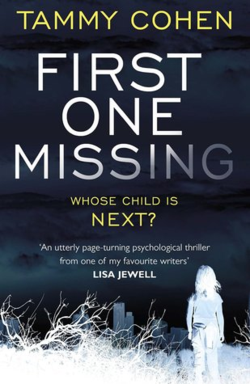 Leanne Miller, The Reid family’s family liaison officer, is determined to find out who the killer of the young girls is and stop him before he has the chance to kill again. Also hopeful to catch the killer is journalist Sally Freeland. She’s been reporting on the case since the first victim was found and has a somewhat chequered past with some of the families.

First One Missing delves into the lives of all those involved in the murders, from the victims’ families, the police investigating the case and even the killer. I found the chapters centring on the killer quite chilling at times as he sees his crimes and urges as normal behaviour. Cohen manages to get inside the heads of the multiple characters involved in a believable way and seamlessly switches from one perspective to another.

Although I’ve found that most psychological thrillers have a much faster pace, I found First One Missing had an almost gentle pace for the most part but I was hooked nonetheless, devouring page after page and staying up late because I had to finish the book. I did like how the pace picked up considerably at the end, creating more of a frenzied feel to the book as the investigation comes to its conclusion. The pace mirrors the urgency of the plot beautifully.

The subject matter of the book isn’t always an easy one but it was fascinating to see how each individual person deals with the tragic circumstances they find themselves in. I was particularly interested in Rory, the teenage brother of the first victim, Megan. Not only does he have to deal with his own grief, he is caught up in the overwhelming anguish his mum faces on a daily basis.

And then there is journalist Sally whose involvement in the case is much more detached. I started off taking an instant dislike to Sally and her vulture-like connection to the case but I did start to warm to her more the further I got into the book. I wouldn’t say I particularly liked or trusted her, but I could see that there was slightly more to her than a cold-hearted journalist only after her next front-page story. The book could have become bogged down with the heaviness of the subject matter but Sally provides some light relief from time to time.

First One Missing is a brilliantly written novel with plenty of curve balls to keep you on your toes and to keep you guessing right until the end. I’ve never read a book by Tammy Cohen before but I would definitely like to read more in the future.