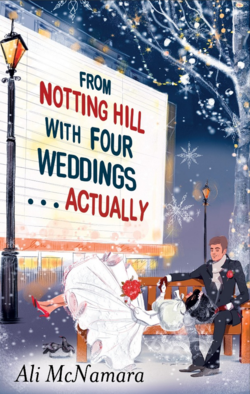 I loved Ali McNamara's Step Back in Time when I had the opportunity to review it last year and so I was thrilled when her latest novel, From Notting Hill with Four Weddings… Actually, arrived in my mailbox. I've not read all the titles in this series, but that was perfectly okay as, while they tell a continuous story, any prior knowledge needed to be able to understand the latest instalment is explained, so casual readers won't get lost along the way.

As the title of this novel may give away, it's finally time for protagonist Scarlett O'Brien to get that happily ever after she'd always been swooning over in the romantic comedy films she adores so much. Things are great between her and her fiancé Sean, though she is extremely busy with her various jobs – always travelling between New York and London – and so she finds it difficult to actually find the time to plan the wedding of her dreams. Sean does offer to take care of some of the arrangements but, knowing how sensible he is, Scarlett would rather do it all herself than end up with any boring old do.

When her charity work leads her to meet celebrity party-girl Gabrielle Romero, the two of them hit it off straight away. Although there are already too few hours in Scarlett's days, she is soon not only working on a super-secret project for Gabi, but she's also roped in to become the other girl's life coach to bring some much-needed normality into her celeb-heavy lifestyle. Scarlett loves all the glitz and glamour surrounding Gabi, but when a friend of Sean also arrives in New York, Scarlett is dividing all her time between helping Gabi and trying to figure out Alex when really she should be focusing on finding a wedding dress…

And when her charity unexpectedly comes under scrutiny, not to mention her picture-perfect wedding venue falls through, Scarlett is at her wit's end. She even starts to wonder whether the happiest day of her life isn't meant to be yet.

Ali McNamara writes some of the sweetest and funniest women’s fiction currently being published and this was another charming romance read by her hand. Sure, it isn't the first (or last) time a women's fiction novel focuses on a protagonist plotting and planning the perfect wedding, with all the trials and tribulations that inevitably pop up along the way, but McNamara's wonderful characters are an absolute joy to read about – no matter what setting they're in.

And even though this is of course the story of Scarlett and Sean foremost, it's actually the smaller characters that I have fallen in love with the most. I've always adored Scarlett's flamboyant GBFF Oscar and his crazy outfits (and in this book he and his partner Luke have some lovely moments to shine), and Gabi perfectly fitted into that circle of friends, which also includes the likes of Bradley Cooper. It may sound a bit silly to include a Hollywood actor like it's no big deal, but it works in McNamara's world and adds to the sheer fun of the novel.

If you love dreaming away with romantic comedy films as much as main character Scarlett does, then this romantic comedy in book-shape is the perfect escapism from the not quite so glamorous or exciting every-day life (which sadly doesn't tend to include random encounters with the dashing Bradley Cooper!).