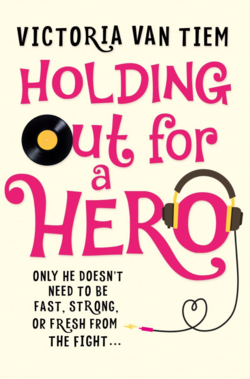 Eighties-loving Libby London is facing a crisis bigger than her questionable wardrobe choices. Her beloved vintage shop, Pretty In Pink, is being forced to relocate, her dreaded birthday is on the horizon and her friends have staged an 80s Intervention to pull Libby out of the decade she loves, and into the twenty-first century. But Libby has good reasons for wanting to remain rooted in the past – reasons that are also stopping her from living in the present.

Victoria Van Tiem’s second novel is a refreshing and honest book, and heaps of fun. Libby is a wonderfully detailed, yet surprising, character. I felt like I knew her instantly, but there was always more to uncover. Libby’s life has suddenly turned slightly madcap, owing to her friends’ insistence that she break free from the eighties. Libby’s best friend since childhood, Dora, is a kind-hearted but very strong force of nature. Easy-going lawyer Finn is an occasional pain in Libby’s side, though she doesn’t seem to want it any other way. Completing the group is Dora’s fiancé, gentle Dean.

Their #80sIntervention is well-meaning, but slightly flawed. Soon Libby is dating some interesting characters who bear resemblance to the cast of the film, The Breakfast Club, throwing Libby head-first into one disastrous, and very funny, situation after the next. While the intervention moves at pace, Libby also has to contend with the news that she will need to find new premises for her shop. Pretty In Pink is another anchor that keeps Libby in the eighties, and she is determined not to let it become another memory she is grasping onto.

There are many emerging storylines in the book, all delicately balanced to create a very compelling read. Libby is undeterred when faced with each obstacle, be it the closure of her store or a cheeky parrot. Holding Out For A Hero also feels like a love letter to the eighties. The author weaves in many references to the decade, notably for music and film, making it a vibrant source of support to Libby and the foundation for her journey.

While Holding Out For A Hero is a very enjoyable book, full of witty lines and comedy situations, it is also a book that doesn’t shy away from talking about mental health. After experiencing trauma as a teenager, Libby has been dealing with depression. I felt very thankful to the author for highlighting this issue, one that is far too often side-lined or misrepresented. It was important to see how a character who has such energy as Libby does, someone who can appear fine on the surface, can have experience of depression. Although Libby often feels isolated, there is always someone there, be it her friends or caring Dr P. There is a lovely note from the author at the end of the book, urging anyone battling depression to reach out.

Throughout the book, I was rooting for Libby to find a sense of peace. She is a very resilient and brave character, using sarcasm and humour to deflect her pain. There are moments of real sadness in places and a couple of times I found myself quite choked up, but above all there is hope – Libby will be okay.

This is a wonderfully inspiring, uplifting and life-affirming book. Libby London believes she is holding out for a hero – there will be many readers who have found one in her.