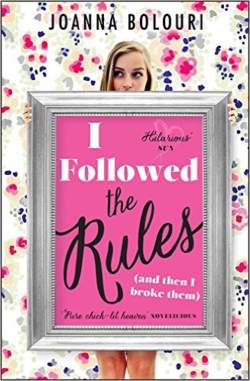 Does playing by the rules guarantee you a man? Cat Buchanan has the answer for you.

If you’re a regular reader, you will know how much I loved Joanna’s debut novel The List last year. It was probably my favourite release in the women’s fiction world, so to say that I was excited for the release of I Followed The Rules would be an understatement. The number of tweets I sent to Joanna about it probably drove her crazy, but the book finally arrived and by the time I’d reached page 17, I’d pretty much wet my pants with laughter!

Cat is a journalist; she’s a single mother with a young daughter, she has a cat that hates her and no boyfriend to speak of. Some days she’s okay with that, but most of the time she’s not, and neither are the people in her life, especially sister Helen who is constantly scouting for eligible bachelors for her spinster sister. Helen’s worried that once Cat’s daughter Grace grows up and leaves home, Cat will become a crazy old cat lady.

When the column that Cat writes, Glasgow Girl, begins to lose readers, Cat knows she needs something to entice them back, so her boss, who has noticed how bleak her love life is (charming!), recommends using self-help dating guide The Rules of Engagement to bag a man for life. Cat must follow every rule in the book and write her column based on her experiences each week. Sounds easy, right? Not so much!

Following rules is much harder than Cat anticipates; between not being able to talk to a guy first and not communicating with them after a first date, it’s safe to say that Cat finds the whole thing more than frustrating. Enter Tom, dashing dentist and gentleman, versus Dylan, sexy and mysterious cinema owner, who makes Cat’s knickers ping off the moment he looks at her. However, she must follow the rules, so Cat begins to apply each one in a hilarious fashion with even funnier consequences. Convinced that the book is never going to work, Cat soon has to change her tune if her column and her love life are going to survive.

I love Cat. She’s hilarious and swears too much, which is exactly why I love her, and I’m sure other readers will, too. She’s nothing if not an honest character and it’s refreshing to read a book that isn’t all about romantic, fluffy encounters. Instead, this book explores the terrifying side of single life, from dating guys who wear gold cravats on a first date and call you ‘m’lady’ to moving from bar to bar drinking coffee and waiting for strangers to talk to you first, each step of Cat’s adventure is just as funny as the last. The men are sexy, the supporting characters entertaining and the plot is witty and fast-paced. There is so much to love and laugh about. Clearly, waiting for Joanna Bolouri’s next release is going to become a regular part of my life.