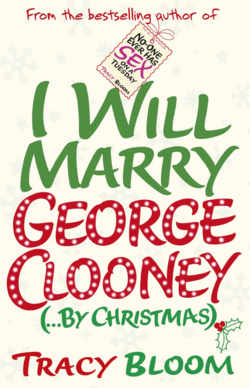 I am sure I am not alone when I admit that yes, there used to be a time in my life where I hoped that the handsome actor I was obsessing over would suddenly know of my existence and whisk me away for a glittering and glamorous Hollywood life. Whereas I grew out of this daydream in my late teens, the main character in this novel, despite being a single mum in her mid-thirties, is still very much convinced that even though George Clooney is always spotted with impossibly gorgeous models by his side, what he really longs for is an average-looking homemaker, who can give his life meaning. And of course, Michelle is fully under the impression that she is the perfect candidate to fill that wholesome hole in George's life.

She already not-so-secretly obsesses over his films, the charity he supports and his jaw-droppingly handsome face on the paparazzi photos she trawls through online, so when whilst in an argument with her teenage daughter she has to think of an ultimatum, it doesn't sound all that farfetched to exclaim that yes, she can totally marry George Clooney – and by Christmas at that. Her (in this case) sensible daughter realises that this will never happen and so agrees that she won't do anything stupid with her boyfriend, if her mum can keep her end of the bargain. What follows is Michelle's mad mission, for which she ropes in not only her best friends and place of employment, but the entire village, to get George's attention so she can ask him for his hand in marriage. No biggie, right?

I love myself some George Clooney and I dig out my Christmas-themed playlists even earlier than Clinton's stocks their festive cards (so pretty much from July onwards), but when picking up this book I didn't realise quite how literally the title summed up the story. I assumed that it was perhaps a metaphor or in a twist of faith the main character would come across a local, sweet guy who coincidentally also goes by the name of George Clooney. But no, Michelle's truly naive enough to believe that she's in with a shot to marry the handsome bachelor if only she can lock eyes with him on the red carpet at the London premiere for his latest film or she rings the doorbell of his house in Italy.

A perfect setup for a novel with an adolescent main character perhaps, but not a woman who is sensible enough to have raised a daughter by herself and works in a chicken factory so she can give her child the opportunities she never had herself, it made the whole story unfortunately unbelievable (and not in an escapism way) and hard to relate to. Thankfully the characters surrounding Michelle, despite encouraging her instead of trying to talk some sense into her, were absolutely lovely and gave the novel depth beyond being a fun and frothy read. Daz the DJ in particular was a wonderful friend and I was really rooting for him along the way. And the backstory with Michelle's sister, who died years before, but is still impacting the family dynamics, was a really touching addition as well.

I Will Marry George Clooney (By Christmas) is a sweet if somewhat simplistic novel about the importance of dreaming big for yourself and those you love. Though it also shows that perhaps instead of wasting time on an impossible end goal, you should look a little closer to home to appreciate what is right in front of you (spoiler alert: it's not that actor whose movies you've watched so many times that you can quote the dialogue).