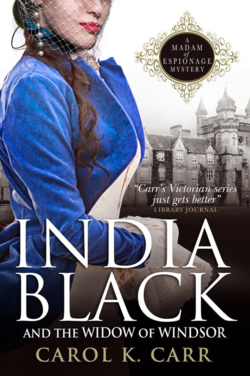 India Black is the madam of a London brothel who has previously found herself working for the government. Now the prime minister is back with another mission for India; to protect the queen. Queen Victoria usually spends her Christmases at Osborne House but this year, after receiving a message from her departed husband Albert during a séance, she has changed her plans and will be staying at Balmoral in Scotland. The government suspects foul play and are on alert for any attempts on the queen’s life. India, along with government official French, is sent to Balmoral to spend the queen’s visit under cover to sniff out any would-be assassins.

I’ve recently read the first in the India Black series and enjoyed the book so it was nice to catch up with the characters again. I found the first book could be quite heavy in its political details but this wasn’t the case with The Widow of Windsor. I thought it was a fun tale of mystery as India and French work together to solve the case of the hidden enemy within Balmoral. India goes undercover as the ladies maid of a marchioness so she can learn about the staff in residence while French uses his position to suss out the guests staying with the queen. I love the chemistry between India and French as they each try to gain the upper hand despite supposedly working as a team. India in particular constantly wants to score points against French but there is definitely a spark between the pair.

My favourite character from the first India Black novel was Vincent, a young acquaintance of India’s, so I was glad when he returned in this novel. He was just as much fun in this book, so I would have liked to have seen a lot more of him as he wasn’t really a prominent character during most of the book. India Black was as feisty as ever, which makes her such a great leading character for the book, whether she is sniping with French or avoiding the wandering hands of Bertie, the philandering heir to the throne. I didn’t think she would cope well with working undercover as a maid as she is used to enjoying a much more luxurious life and doesn’t have to answer to anybody but herself, but she dealt with having to work for the elderly marchioness much better than I thought she would.