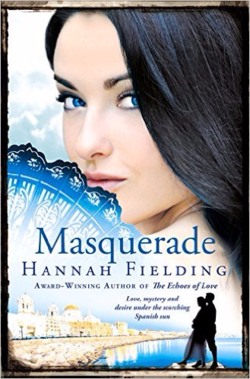 In summer 1976, Luz returns to Spain from England after her first commission as an author goes awry.  Back in Cadiz, she soon becomes entangled with a mysterious gypsy who rescues her from the beach and also with her new employer, a successful businessman who has commissioned her to write a biography.  The two men have totally different personalities, but look uncannily alike.  Luz is soon entangled in a complicated web of secrets, feuds and intrigue as she tries to work out what or who she really wants.

This is the second book in Hannah Fielding’s Andalucian Nights trilogy, although you need to have read the first book – I hadn’t and I had no trouble following what was going on, although I did find out the outcome of the first book in the course of the book.  It feels like a sweeping epic – with revelations from the past all over the place and grand romantic gestures.

I though Luz was an interesting character – if a little spoilt, but I think that’s probably a realistic consequence of having a lot of money and not a lot of worries! I wasn’t surprised by the way the plot unravelled and there were a few quirks of Hannah Fielding’s writing style that slightly jarred on me,  but I was still mostly swept along – even if I found some of the love scenes a little overblown.

I can’t quite put my finger on why, but Masquerade reminded me of early Barbara Taylor Bradford novels – but set in Spain and in the 1970s.  It’s a bit less melodramatic than that comparison might make you think – and there isn’t any of the star-crossed lovers through the generations that you get in the Woman of Substance trilogy, but I think if that sort of book is your thing, you should definitely try this.

Find out more about this book