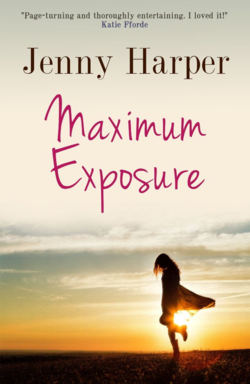 Photographer Daisy Irvine works for her local newspaper, The Hailesbank Herald but the newspaper is in trouble. If its circulation and advertisement revenue doesn’t improve, it will be shut down. When Daisy’s boss dies suddenly, Daisy takes on the challenge of saving the newspaper.

Ben Gillies grew up with Daisy but moved away when they were teenagers. With his parents back in town, Ben visits and reacquaints himself with Daisy and helps out with her campaign to save the newspaper. Ben is attracted to Daisy but she is still hung up on her ex, Jack.

Maximum Exposure is quite a sweet, light-hearted read with a large cast of characters to get to know. I warmed to Daisy immediately and thought she was a fun character, despite being heartbroken over the breakdown of her relationship. She’s quite ditzy at times but this only added to her charm for me. I really felt for her as we learn about her past, growing up with a brusque father who didn’t seem particularly interested in his daughter and seemed to thrive on putting her down. With all this, plus her heartache over Jack, I was hoping Ben would come sweeping in and make her happy.

I liked all of the different storylines that were happening besides Daisy and Ben’s, from their family to the rest of the newspaper’s staff as they kept up my interest throughout.