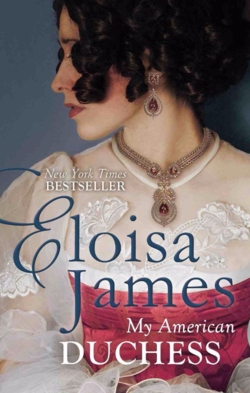 American heiress Merry has already broken two engagements and has come to England to escape from the reputation that that has given her. She’s the last woman the Duke of Trent would consider marrying but after an encounter on a balcony, he can’t get her out of his head. The trouble is, she’s just agreed to engagement number three. Merry is determined that this fiancée is for keeps, but has she made another mistake?

My American Duchess surprised me. I was expecting a fish-out-of-water, comedy of manners, forbidden love novel with a long slow build to a dramatic showdown, but although that’s in there, it’s actually only half the story – a lot more happens beyond that. I didn’t think that it was always totally successful, but for the most part it worked well and I can’t say more without being properly spoilery!

Merry is a great heroine. Smart but flawed, her inner monologue is funny and honest, and, although I found Trent a touch frustrating at times (he’s a very emotionally repressed alpha male who isn’t very good at realising when he’s wrong), I enjoyed their story. Eloisa James is a Shakespeare professor “in real life” and although the book wears it very lightly, the language and research always feels spot on. This is a standalone novel – but has a teasey set up at the end for a possible sequel.

I enjoyed My American Duchess and raced through it in two days and didn’t want to put it down. It isn’t my favourite of James’ novels – but the bar for that is incredibly high. If one of your 2016 resolutions is to read more widely across genres, this would be a good place to dip your toe in the historical-romance water. If you’re into the genre, you’ve probably already got this on your to-read list. If you haven’t, you should have.