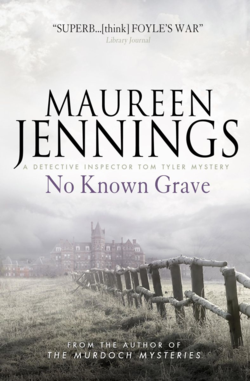 No Known Grave is the third book in the DI Tom Tyler series by Maureen Jennings – who also wrote the Murdoch Mystery books. This time though, instead of late nineteenth century Canada, the setting is England during the Second World War.

Tom Tyler has just arrived in Ludlow to take up a new job with the local police force, when a disabled Great War veteran and his son are found brutally murdered in their cottage in the grounds of a convalescent home, run by Anglican nuns in a former manor house. He has to figure out who carried out the crime from a list of suspects which includes patients who can’t walk or who are blind and others who are traumatised – and some who are a combination of the three. And then the anonymous letters start arriving.

Firstly, I was a little worried that I might feel like I was missing something because I hadn’t read the first few books in the series. But because Tyler has just moved to a new town, that really didn’t feel like it was the case.  Yes I was missing some of the backstory about the mysterious (to me at least!) Clare – and his failed marriage, but that didn’t affect my enjoyment of the detection – the plot is interesting enough to outweigh that.

I liked Tom Tyler – he feels like a real person, unlike some fictional detectives who can feel a bit perfect or all-seeing. There is a large cast of characters, and the residents of the convalescent home took me a while to get straight in my head, but it is worth making the effort. I’m a sucker for a good murder mystery – particularly the sort set in a time without CSI (and which don’t have too much gory detail) – and this ticked a lot of boxes for me. This is quite a dark and unpredictable thriller, which created a gripping scenario in a believable portrait of Britain during WW2.