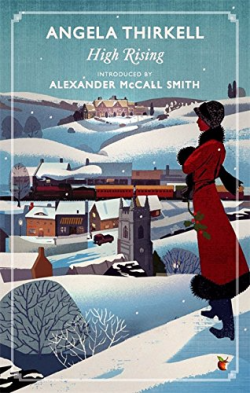 When Anthony Trollope penned the Barchester Chronicles in the early Victorian era, I don’t think he would have envisioned that nearly a century later, an English writer by the name of Angela Thirkell, would project her own characters and situations on the beautiful canvas that he had painted.

High Rising is Thirkell’s debut into the series of novels set in Trollope’s bucolic, rural county of Barsetshire. Times have changed, from the Victorian era to pre World War 2 and so have manners, but the charm of provincial life still remains. The upper middle class still have servants, their children still go to boarding school but now they drive enamel cars.

In this book we are introduced to middle-aged, successful writer of middlebrow novels, Laura Morland. Widowed and mother to four sons- three of whom are grown up, she resides in the locale of ‘High Rising’, in close proximity to the neighbouring community of Low Rising and the story deals with the mildly tremulous upheavals facing these neighbourhoods. There are a number of characters that appear in the story: one of them is the biography writer and historian George Knox, friend to Laura.

The delicate equilibrium of rural life is disturbed when an outsider elbows her way into the picture. Her name is Mrs. Grey, secretary to George Knox, with an underhand plan to become Mrs. Knox and stand to gain from the author’s wealth. Various measures are taken to upset her plans and to unearth her dubious personal history. There’s another romantic story: between Laura’s publisher, Adrian Coates, and Knox’s daughter, Sibyl and altogether it’s a charming story with lots of memorable characters (some of whom reappear in subsequent episodes of the series) and funny situations.

Thirkell describes her protagonist Laura Morland as a writer of ‘good bad books’ and I can’t help but feel that Thirkell is speaking about herself in this description. I also feel that Thirkell doesn’t take herself too seriously when writing this series and she certainly has no qualms about borrowing freely from the characters and ideas of several Victorian novelists, Trollope and Dickens amongst them.

What makes her writing and her series of novels (nearly thirty in total) really special is her keen sense of observation of social attitudes and manners, especially the effect that the war had on them. Her series of books in their entirety, take us through the entire gamut of social history encapsulating the Second World War. In this sense they are a valuable record of provincial England and the decaying upper-middle class.

Angela Thirkell’s books are historically important and the worth of her novels should not be gauged from a single book. Individually the books are frothy and funny to read- just the pick-me-up that’s needed during the holidays, especially since this particular story is set in and around Christmas. And come on! Who could possibly resist those book covers?

FIND OUT MORE ABOUT HIGH RISING