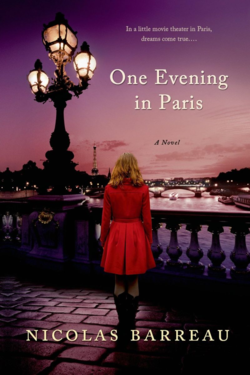 Alain Bonnard, captivated by film since he was a child, runs a small art cinema in Paris. He’s not interested in the popcorn or the effects; for him, it is all about the story and the communication of feelings. Being a true romantic, Alain is interested in his small, regular clientele and their lives, often inventing dramatic backstories for them. There is one woman in particular who stands out for him though, with her red coat and unvarying chosen seat. When Alain finally plucks up the courage to ask her to spend some time with him, the complicated twists and turns normally reserved for the movies start to blur with reality. Alain is in for magical adventure of mystery and love.

There are a lot of references to French cinema very early on in this novel, which made me wonder how I would bridge the gap in my own knowledge, but Burreau deftly winds in the relevant plots and characters without leaving the reader feeling confused. (There is also a helpful list of film references at the end, just in case you fancy a quick Google to fully understand the link like I did!) Having inherited a small art cinema, Cinema Paradis, in Paris from his uncle, who found life beyond film at a very late age, Alain seems destined to end up the same way. That is until a much welcomed entourage including a famous director, a devastatingly beautiful actress, paparazzi and punching cowboys end up in his humble foyer, all determined to change Alain’s life. The new changes bring much cause for celebrations, but a shadow in the shape of the mysterious Melanie, the woman in the red coat, won’t seem to stop haunting Alain. Her extremely fleeting presence in his life has firmly engraved her in his sentimental heart and Alain cannot believe that she has no part to play in his future. Together with his newfound friends and his womanising, long-term best friend, Robert, who does not share Alain’s romanticism, the fascinating truth about Melanie and her links to then events occurring around him are revealed.

I loved the setting of Cinema Paradis, totally understanding Alain’s desire to protect its historical sanctity from the modern juxtaposition of iPhones and flashy effects. The characters are equally whimsical, with some gentle stereotypes lovingly borrowed from popular old cinema, giving the love story an equally light-hearted feel with drops of both subtle and slapstick comedy. My favourite had to be the nod to Breakfast at Tiffany’s, which fits in amongst many other well-known references.

This is a beautiful, old-fashioned, simplistic love story, set in modern day Paris that will restore your child-like belief that anything can happen, no matter how surreal or magical.