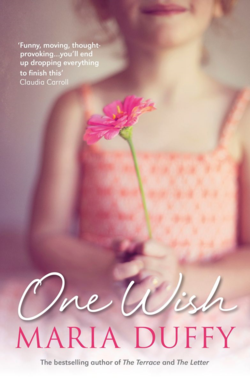 Becky Greene moved to Ireland to provide a stable, successful life for herself, away from the horrors of her own past. Finding herself pregnant after a one-night stand leaves her with a cherished daughter to also take care of. At four years old though, Lilly is starting to ask questions about her mother’s past and the normal structure of a family. Becky realises that she is allowing her own experiences of a dysfunctional home life dictate the way that she raises her daughter and decides it is time to make a few changes. Firstly, she intends to find Lilly’s father, a high-flying executive called Dennis Prendergast, who she hopes may want to play a part in their lives. When she does track him down, he is not the man he once was and Becky is forced to take a good look at her own morals and prejudices.

Duffy drops the reader straight in the action with this novel, as the story of Becky and Lilly is already in full flow. Becky is a working mother with a great support system from older friend and nanny, Alice, and younger work colleague, Kate. Her entire world revolves around Lilly, who had been written in to life with love and adorable quirks that made me instantly care about her too.

The mystery with finding Dennis is instantly intriguing and he is another character that has been carefully created to avoid a stereotype. Beyond the stunningly vibrant cover, the novel deals head on with a variety of relevant, difficult issues such as homelessness, depression, domestic-abuse, the recession and fear of aging. The insight into homelessness was upsetting at times, but Duffy holds no punches showing the extreme dangers of life both on the streets and in hostels, and the plethora of heart-breaking reasons for decent people ending up there. She also manages to highlight the help that is available to homeless people, in a non-patronising manner, showing the difficulties in continuing and accessing this help with diminishing funding.

Each character is there for a reason, struggling with their own personal demons. Becky is made more realistic by the fact that she is far from perfect; she’s not always likeable and can be incredibly selfish, blind to the plight of those around her. This highlights the strength of her friendships with Kate and Alice, who seem to forgive her no matter how dismissive and rude she can be when she is upset. Her troubled past gave her depth and it was refreshing to become so familiar with one character’s personality.

Some of the solutions towards the end are too easily tied up, making some of the more complex issues seem trivial compared to their original outset. There are also a few plot movements that were quite obvious but this didn’t take away from the enjoyment of the novel as a whole for me.