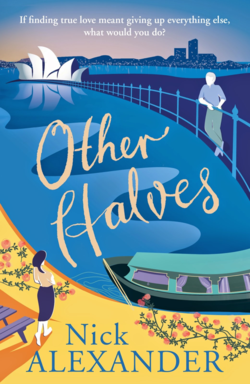 After 15 years of marriage, Hannah has left her husband Cliff to pursuit a romance with his younger brother James. Hannah thinks she has finally found true happiness, but a life with James proves to be complicated. Not only does Hannah’s son Luke despise her new boyfriend, James lives on the other side of the world.

Cliff is devastated when Hannah leaves him but the separation allows Cliff to explore his sexuality, something he has been struggling with since he was a child. Bonding with his son over their hatred of James, Cliff develops a stronger bond with Luke than ever.

Hannah and Cliff’s marriage is over, but perhaps now their lives can really begin.

Other Halves is the sequel to Nick Alexander’s previous novel, The Half-Life of Hannah, which I quite enjoyed apart from a couple of niggles. The first was the pacing of the book as I found the first two thirds of The Half-Life of Hannah to be incredibly slow, which wasn’t a problem at all with the follow up. Other Halves had a much better flow and I found myself flying through the pages. My other niggle with the first book had been the character of Cliff, who it turned out had acted appallingly at times during his relationship with Hannah and while this gave Hannah the upper hand when it came to leaving him in the first novel, it posed a bit of a problem for me in the second. Although I would have normally sided with Cliff, I couldn’t get past the knowledge of what he had done (which I won’t mention as it’s a spoiler) so I couldn’t fully warm to him. I didn’t warm to Hannah either as she behaved so selfishly and could be quite a bitch at times. The only character I really took to was their son, Luke. He’s only 12, but he’s very mature and loyal.

While I struggled with the characters in the book, I did really enjoy the storyline, especially Cliff’s as he dealt with his sexuality for the first time. I think I would have enjoyed the book so much more if I hadn’t known what had occurred previously. An attempt had been made to lessen the event but, for me, what Cliff did was unforgivable and it was constantly at the back of my mind as I read the second book.