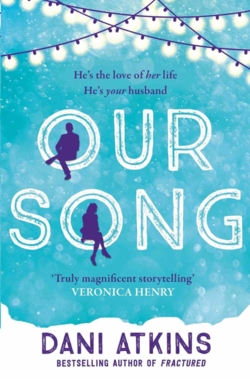 In 2013 Dani Atkins broke my heart with her debut novel Fractured, which was all sorts of amazing. It was an emotional read, yes, but also an incredibly beautiful and unique one as it detailed the two possible paths in protagonist Rachel's life and her trying to discover which one was real, and which one was a figment of her imagination. It shouldn't come as a surprise that with her latest novel, Our Song, Dani Atkins once more lets different stories collide in a fascinating yet devastating way.

When two husbands are rushed into hospital under life-threatening circumstances on the same day, their wives meet in the Relatives' Room as they're waiting for news from the doctors. Except, this isn't the first time they've met. Ally and Charlotte have a complicated history as they were roommates in university and eventually Charlotte started dating Ally's then boyfriend, David. This forced an even deeper rift in what was already a very tentative friendship between the two women. Not to mention the fact that David (being one of the men fighting for his life in hospital) has Ally worried sick not about one person that night, her own husband Joe, but two.

With only each other for company during those agonising hours waiting for news from the hospital staff, Charlotte and Ally are forced to revisit their shared past and finally open up to each other about what really happened between them – and who was at fault. With the lives of their husbands hanging in the balance, emotions run high as the women share their stories with each other and the reader. The terrible situation they're in forms a heart-wrenching backdrop to some really sweet moments, and throughout just a single night it feels as if they live an entire lifetime. As doubt starts to seep in about who should've ended up with David, a twist of fate might just make that decision for them in the most cruel of ways.

Dani Atkins excels at bringing together different paths of a person's live. Her stories are rooted deeply in destiny and with Our Song she has done so again. Though rather than giving her protagonist two different paths to a possible future, this time around the choice has already been made and it is the consequences of it that all the characters have to try to come to terms with. It's easy to get stuck in the past and relive the happiest of moments, but it's what's in the here-and-now that is most important and both Ally and Charlotte have to come to the realisation that the direction their lives have taken is how it should've been all along.

Of course this isn't just a novel about first love, missed opportunities and finding closure, but it's also very much a tearjerker forcing the characters to see what is truly important to them in the worst possible way. With a rising uncertainty over whether Joe and David will even make it through the night, Charlotte and Ally do not only revisit their own shared past but they also remember some of the most beautiful moments they've shared with their respective husbands, which makes them appreciate how their lives turned out much more than it did before mortality was thrown into the mix.

And while I predicted how the novel would end about two-thirds in, this didn't lessen the impact of the harrowing finish in the slightest and I still found myself weeping over those heart-rendering last chapters. Our Song will make you look at your own life and appreciate where you are in the present more so than ever before, rather than perhaps being stuck on something that happened in the past or wishing for a different future. It's a beautifully crafted story about counting your blessings and being appreciative of what – and who – you've got in life, because everything could be taken away from you with just the snap of a finger.