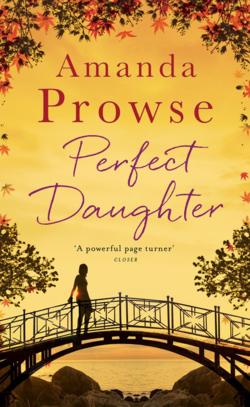 She’s a wife, mother and daughter, but somewhere over the years Jacks Morgan has lost herself. Each day is jam-packed with fulfilling the needs of her family and she barely has time to have a cup of tea let alone dwell of what might have been. Her husband Pete may have been there through thick and thin, but he is not much help when it comes to the everyday struggles of having a stroppy teenager and a mother with Alzheimer’s under the same roof.

Jacks may not be living the life she always dreamed of but she is determined that her eldest daughter Martha will reach her full potential. However, when a new boyfriend pops up out of the blue, Jacks is terrified of history repeating itself and the last thing she wants is Martha’s ambition to be sidetracked.

Amanda Prowse’s books allow an insight into ordinary people dealing with difficult situations and in Perfect Daughter we step right into the shoes of Jacks Morgan, who is drowning under her family’s demands. I really felt as though I was in amongst the unpacked boxes and half-finished cups of tea described in this novel. A mother with Alzheimer's is hard for anyone to handle, but even more so for Jacks as the flashbacks to her past show that their mother/daughter relationship was strained even before the illness struck. The chapters alternating between time periods worked extremely well and showed just how much her original life plan differed from the actuality. Both past and present were equally riveting.

Interspersed with the mundane day-to-day caring responsibilities, Jacks also has her daughter Martha to contend with. Martha is on the cusp of adulthood and preparing for university (she has even bought a toastie machine). Jacks has high hopes for her daughter and is living vicariously through her, which is a lot of pressure to place on a child, but understandable as history is gradually revealed.

Perfect Daughter is an absorbing read with a character that most women will identify with in some way. With this book Amanda Prowse has scored a hat trick of 10/10 scores meaning she is now firmly amongst my all-time favourite women writers. She is also a reader’s dream in that she writes faster than I can read and still manages to maintain her high standards. Nobody's perfect but Amanda Prowse’s writing is pretty close!