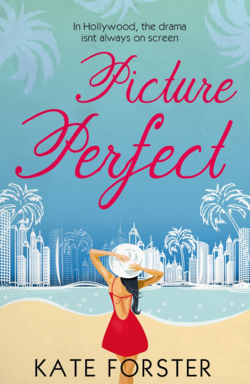 We’ve all seen the behind the scenes footage of fabulous celebrity parties and red carpet events in television and wondered what it would be like to be there; to walk the red carpet, to feel the atmosphere in the room and to clock the bitchy stares between celebrities. Picture Perfect allows us to do just that; it takes a step inside the drama of Hollywood … and not just on screen.

I first discovered Kate Forster when I reviewed her previous novel, The Perfect Retreat, a year ago and fell in love with it. It was an excellent read, which left me with high hopes when this new novel popped through my letter box.

Kate Forster has, once again, set her novel against the backdrop of Hollywood and the glitzy town’s richest and most talented stars take the lead. Zoe Greene manages the careers of Hollywood’s biggest celebrities and she’ll do anything to help them – and herself – get ahead. Maggie Hall, meanwhile, has been America’s sweetheart for nearly 20 years, but is about to find that she can’t fight growing older. And finally, Dylan Mercer has run away from New York to try her luck in Hollywood, but she isn’t there for the money, the wealth and the fame, she’s there to find her birth mother.

This book focuses on how glamour and desire can bring out the worst in people. You can find yourself being cheated and lied to in order for others to get ahead which, in my head at least, I’ve always believed Hollywood to be like, so the plots within the book seemed very realistic to me. If you are a fan of Kate’s other novels then some of the old characters appear here, too, most notably Willow Carruthers from The Perfect Retreat.

As I found in the first of Kate’s novels, she manages to create characters with many layers. Often they may seem insufferable on the surface, but throughout the books, the author slowly reveals who people truly are, and you end up liking them in a way you never thought possible.

As expected, you are drawn into a world of unlikely romances, giddy Hollywood parties, celebrity meltdowns, young love and ultimately a discovery of who you are. I was reading so fast I think I broke a new record!

This may seem to some readers like just another book focused on Hollywood glitz, glamour and backstabbing, but there is more to it than that. I had forgotten that Kate Forster is very gifted when it comes to writing emotional scenes; the first few pages of this book had my heart catching in my chest. There is more to the novel than meets the eye – it is a story about love, adoption and the sacrifices mothers make to provide better lives for their children.

I didn’t quite feel the same level of excitement about this novel is I did her previous, but it is an entertaining read nonetheless with some beautiful messages behind all of that glitz and glamour.