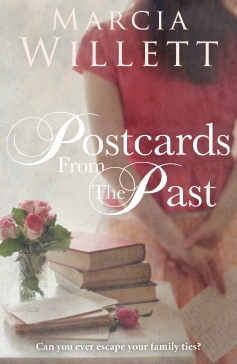 Billa and her brother Ed live together in their childhood home in a rural Cornish village. The old converted butter mill holds many dear memories but it also contains reminders of a past that Billa and Ed would rather forget. But when they start to receive postcards from a mysterious figure from that time, they start to panic. It has been decades since they last saw or heard from him – what does he want from them? And why now?

Postcards From The Past sounded like such an intriguing read and I couldn’t wait to dive in and find out about the sinister character who is encroaching on Billa and Ed’s idyllic lives. The book begins with the first postcard and its simple but unnerving message and I was glad that we were being thrown straight into the action. Unfortunately, the pace of the book wasn’t what I expected and it slowed right down from there and didn’t really pick up until around two thirds of the way through the book. Along the way, we are introduced to characters from Ed and Billa’s lives, as well as from the village and I thought this slowed down the plot greatly, especially as some of these characters seemed superfluous to the plot. These unnecessary storylines got in the way of the main plot for me, which was frustrating. Eventually the pace did pick up and my intrigue was heightened, but I was disappointed again with the ending, which was rather abrupt and not as satisfactory as I would have liked.

On a more positive note, I did like the Cornish setting of the book, particularly the old butter mill and I really warmed to Dom. I enjoyed his story and thought that he was a well-rounded and caring character. The book does have some intriguing points within the book but, for me, they didn’t quite pay off in the long run.