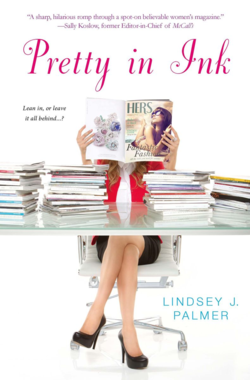 The Devil Wears Prada with a twist!

Hers magazine readers are on the decline and the once popular magazine is no longer the one that readers are grabbing from the shelves. In fact, it has had so many redesigns that readers aren’t even sure what they’re getting anymore, which means a change is set to come. This change starts with the firing of the editor-in-chief and replacing her with the ruthless, blisteringly high-heeled Mimi, who knows exactly what she wants from the magazine and will tread on as many people with her six-inch Louboutins as she needs to if it means getting the job done. The staff at Hers magazine fear that their beloved editor-in-chief may not be the only one for the axe…

This book has mountains of sass. Originally I was worried that it would be a rip-off of The Devil Wears Prada, but I was pleasantly surprised by the original writing style. The story is told from the viewpoint of Leah, a breast pumping mum of three, who fears she may be next for the chop. Leah idolised boss Louisa, but even she agrees that she had lost her vision for the magazine. We’re also privy to the viewpoints of other writers and contributors at Hers, too, each with their own personal stories as they battle to keep their jobs. And battle they do. As soon as Mimi takes over, she brings her own entourage with her and war rages in the Hers office.

I liked the flare that this book had. It is a brave decision to write from the viewpoints of so many different characters but Lindsey J. Palmer pulls it off well and I enjoyed meeting a new character in every chapter. This formatting did mean that some characters were less memorable than others, but I enjoyed the majority of them.

Leah and Mimi are interesting lead characters and both are both well written.

Leah is struggling with Mimi’s desire to modernise the magazine and there is particularly awkward scene in the board room about how to ‘sex up’ the relationships page.

Mimi is a character you like one minute and loathe the next; she is the game changer, the one that comes into your workplace and wants to change everything causing pandemonium amongst the staff. That said, there were moments when I liked her and appreciated her forward thinking for the magazine. What’s clever about the many characters in this book is that just as you form an opinion about one of them, you read about them from another character’s perspective and your opinion completely changes, which always kept me on my toes.

As with any book based at a magazine, there is drama, emotion and a few hot-headed arguments along the way – all of which are incredibly entertaining. Overall, this book does not rely on the formatting of other books you might have read, which are based at glossy women’s magazines; it has a unique style and that is its biggest selling point.