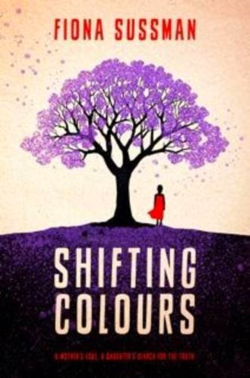 Celia Mphephu works as a maid for Rita and Michael Steiner, working hard and sticking to the strict rules imposed by the authorities. Trouble is brewing all around her as revolutionists fight to bring equality to the black people of South Africa. Celia has a young daughter with her and fears what sort of country Miriam will grow up in with all the political unease. So when her employees tell Celia that they are moving to England and want to adopt Miriam and take her with them, Celia reluctantly releases her daughter, hoping she will have a better, more stable life with the Steiners.

Shifting Colours begins in 1960s Johannesburg and spans three decades as Celia and Miriam go their separate ways. The book is a powerful, emotional read, depicting the horrific brutality of South Africa’s system of apartheid. I felt an instant connection to both Celia and Miriam and I loved the scenes from a young Miriam and her views on the world around her. It was heartbreaking to see the pair separated, especially as Celia clung onto the promises Rita and Michael had made to her and Miriam was left confused about when she would return to her mother.

I thought the book was beautifully written. The story was told simply but was packed with overwhelming emotion as Celia and Miriam forge new lives without the other. I was quickly drawn into their lives and felt compelled to keep reading to see where they would both end up. It certainly isn’t a light read, but is a thought-provoking and moving tale that will stay with me for a long time.