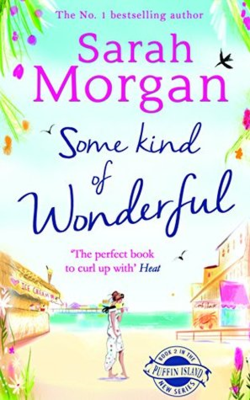 Ten years ago, on Puffin Island in Maine, Brittany Forrest met Zachary Flynn. Their whirlwind romance culminated in marriage, lasting only ten days as Zach walked out and left Brittany heartbroken. Brittany’s sense of adventure, first fuelled by the rebellious Zach, has unexpectedly driven her back to the Island, and, even more unexpectedly, back to Zach. Their marriage may have been short lived, but as they soon discover, the chemistry is still there.

Some Kind of Wonderful is the second book in Sarah Morgan’s Puffin Island series, which began with First Time in Forever. Not having read First Time in Forever, I was concerned about delving into a series part way through. My concern was unfounded however; the reader can quickly catch up with the key events of the first novel and I very easily settled into the second book. Morgan interlaces Brittany and Zach’s reintroduction, the meddling of the other Islanders, and the ensuing emotional drama effortlessly, peeling away Zach and Brittany’s stubborn and indifferent attitudes to one another.

Having escaped an abusive childhood, Zach found solace on Puffin Island, helping to run the local camp and train as a pilot, which helped him to experience true freedom. I sympathised with Zach hugely; his broken childhood forced him to shut out emotion and the ability to trust. He rebuffs Brittany’s affection under the assumption that he will only let her down, as he previously has. Brittany tries to make Zach see the connections that he has made on the Island, and how many people care about him. Although I couldn’t see Zach as the love ‘em and leave ‘em rogue he claims to be, I could see him as vulnerable and kind-hearted, which he claims not to be.

Brittany is a Puffin Island local, having grown up with her grandmother. She left the Island after the breakup of her marriage and carved out a brilliant career in archaeology, along the way meeting her two best friends, Emily (from First Time in Forever) and Skylar. Brittany is a real force of nature: kind, funny and intelligent. Hearing about aspects of Brittany’s life as an archaeologist, and her unusual fascination with Bronze Age weapons, allowed the reader to dig deeper into the life she focused all her energy into following the marriage breakdown. Although smarting from Zach’s reappearance in her life, she remains resolute in appearing unaffected by his presence, which leads to many intense moments between them. She is incredibly stubborn and independent, but only ever willing to help her friends if they need her. This is an offer she naturally and sincerely extends to Zach.

After not seeing each other in so long, one can only imagine the reaction. The chemistry and magnetism that still exists between Zach and Brittany comes close to boiling over; on a couple of occasions I thought they might burst with the unspoken attraction. This key conflict between the characters was enticing. There is so much that was never said in their short time together and so much still to learn, that I was pulled along with both Zach and Brittany, discovering the other person’s motivations and understanding their decisions for the first time.

There are many supporting characters in the novel, all of whom inject more humour and warmth. Ryan and Alec are there to support Zach, as is Philip, the leader of Camp Puffin. One thing I quickly ascertained from the novel is the islanders’ capacity for loyalty, as well as gossip. News of Zach and Brittany’s reunion quickly spreads. Although that is one aspect of Puffin Island life I couldn’t admire, the descriptions of the salty sea air, the beach under the summer sun and breezy cliff walks inspired a real craving to experience more of Puffin Island. Luckily, the third book in the Puffin Island series, which will feature Skylar, is out in October.

Sarah Morgan’s second Puffin Island offering is a fun and enjoyable read, carried by thoughtful characters the reader will root for. Some Kind of Wonderful is a perfect kind of summer read.