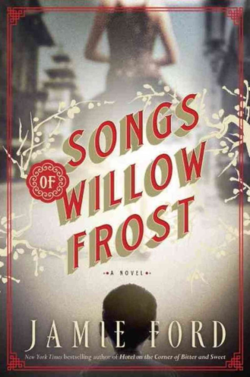 Twelve-year-old William Eng has been living in Seattle’s Sacred Heart orphanage for five years. He has vague memories of living with his mother and has always wondered what happened to her. During a rare treat of a cinema visit, William sees the actress Willow Frost on the screen and is convinced she is his mother, Liu Song. Determined to uncover the truth about his past, William escapes from the orphanage to track down the glamorous actress.

Songs of Willow Frost is the heartbreaking story of Liu Song, a young Chinese-American girl who finds herself trapped in a life she has no control over. Set in the 1920s, Liu Song has little rights or respect and struggles through life without support. William knows his mother loved him during their short years together but he doesn’t know what happened to her once he was taken to the orphanage and assumed she was dead. So he is filled with intrigue when he sees the striking resemblance of Willow Frost to Liu Song.

Songs of Willow Frost is a beautifully written and moving tale that had me gripped. I found myself submerged in the life of Liu Song, as intrigued by her story as William and I couldn’t help hoping that there would be a glimmer of happiness at the end. The story shifts decades from Liu Song’s 1920s life to William’s in the 1930s, which created further intrigue for me. I felt for both Liu Song as her story unfolded, knowing that yet more heartache lay further down the road for her, and for William as he clung to the hope that his mother would want him back. I thought William was a fantastic character and I liked the friendships he had within the orphanage with Sunny and Charlotte. He hadn’t been given the best start in life but he gets on with things with little complaint, despite the hardships of living in the orphanage. I also admired his fire and determination to find Willow Frost and discover his past and hoped that his story would have a happy ending.

The book takes place during the rise of the film industry, with cinemas popping up everywhere. The glamour and indulgence of the film industry is contrasted with Liu Song’s lowly existence in Seattle’s Chinatown and the Depression of the 1930s. Although the book is poignant and quite distressing at times, I thought it was a compelling read that I enjoyed very much.