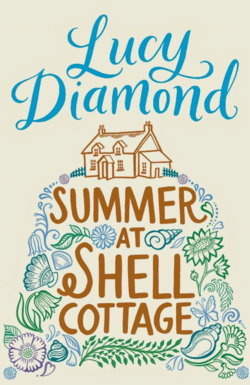 Shell Cottage in Devon is a special place for the Tarrant family, full of memories of happy summer days. Every year, the family comes together for barbeques, beach fun and laughter. This year though, the place that Olivia honeymooned at, holidayed at and eventually purchased with her beloved husband, Alec, doesn’t hold as much appeal. Alec has died suddenly and Olivia is at a complete loss.

Daughter Freya has been struggling recently with supporting her mother and dealing with her own grief, but with the help of alcohol she can cope, even blanking out an awful day at work that’s threatening her career as a GP.

Robert’s dreams of following in his father’s footsteps are haunting him and hiding his secret from his wife, Harriet, is taking its toll on their marriage. Also, his step-daughter, Molly, seems to be pulling away from them.

Can Shell Cottage pull them all back together and kick-start the healing process?

I am a massive fan of Lucy Diamond so when her new book lands through my letterbox, I know I am in for a treat. As usual, Diamond has created characters that are easy to like and empathise with, each one revealing their personalities and insecurities as the story unfolds. The novel begins with the death of Alec and I was immediately taken with his widowed wife, Olivia. Realising he had been the biggest part of her life for the majority of her life, I didn’t see how she could possibly overcome the grief, especially when she realises he has been keeping a heart-breaking secret from her.

As the plot develops, it becomes clear that Alec is not the only character with a secret. Despite the mistakes made by some of the characters, some more monumental than others, the novel reminded me that everyone has good in them and deserves a second chance. Though I would class this as lighter reading, some of the issues surrounding teenage Molly were quite controversial but sensitively explored. I certainly didn’t see the twist coming in that storyline!

The only letdown for me was that I felt all the characters were well developed except for Victor, Freya’s husband. He seemed more of a generic-fit husband than a rounded person and that was a shame as I felt I couldn’t get to know him like the others. Harriet’s relationship with Robert was much more intriguing as she assumes he views her in a particular light, but his real feelings are revealed to be much more loving and appreciative.

A novel that shows when the going gets tough, the most successful families pull together.