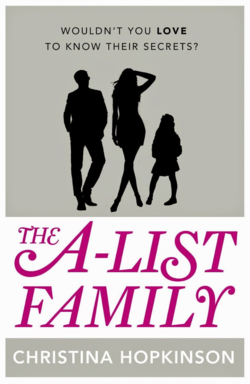 They say that you shouldn’t judge a book by its cover but, as with most things, we humans tend to judge on first impressions, we can’t help it, it’s in our blood. So when The A-List Family dropped through my letterbox, I was a little bit “judgey” about its cover – slightly boring and not very appealing, but once I got past that and delved into pages, I was reminded of the old saying above. You definitely shouldn’t judge this book by its cover.

Anna is a classics graduate from Oxford. Incredibly intelligent, she has spent her life striving for academic success, which is why she cannot understand how she has found herself being abused and ignored by the general public day in, day out on the streets of London as she tries to collect donations for a charity. Finally fed up with her thankless job, friend and fellow graduate, Toby, offers her a position working as a tutor to the stars (well, the stars’ children anyhow). Originally apprehensive, Anna weighs up her options. 1. Be spat on in the street each day for charity or 2. Get a job with living quarters included, use the knowledge she has and feel like a bit of a sell-out…

Anna selects option number two and she is quickly employed by Janey, the PA to movie star Cally Steward and director and academic Sholto Carpenter, the A-List couple who seemingly have it all, and their 8 year old daughter, Antigone. At first Anna isn’t exactly sure what her role within the house is. It certainly isn’t that of a nanny as Bea is also employed, and she dresses, feeds and puts Antigone to bed. Anna slowly begins to forge an identity for herself within the busy house as Antigone’s academic enrichment support. Antigone isn’t like other children her age. She is incredibly intelligent and doesn’t have many friends, mainly due to being a little socially awkward and quite rude at times, but she is endearing to read. As secrets start to be revealed inside the celebrity house, Antigone's immaturity begins to emerge, which makes her more likeable.

This story gets more juicy the more you read. Secrets and lies are revealed very slowly and Christina Hopkinson drip feeds you small snippets or clues to keep you turning the pages. The setting of Lorston Gardens, though glamorous, often feels like a prison and this is reflected in Anna’s desire to have control over her own life and her own decisions, something which she quickly realises she isn’t allowed when she is spotted by Janey, the family’s dark and twisty PA, in a tryst with photographer, Jack.

I was a little disappointed by Anna’s character, I thought that more of her past could have been explored. There are short mentions of her parents, but they don’t feature very often, and I felt like she was a bit naive at times. Cally and Antigone, however, were joys to read. Cally is especially interesting as the celebrity actress who is meant to have everything and look fabulous, but her punishing exercise, eating and make-up regimes are ruining both her physical life and her relationship with her daughter.

Essentially, this is a story about identity, scandal and lies, with twists and turns that you don’t always see coming. There is depth to the characters’ stories, however, and it certainly doesn’t rely on superficiality. A lot more intriguing under the cover.