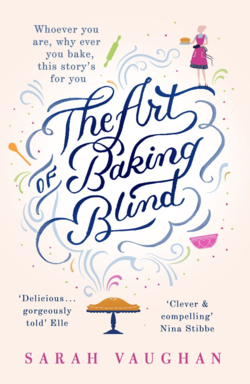 Before I knew anything about the contents of this novel I had already fallen in love with the cover. It begs to be oohed and aahed over, not to mention to be stroked. A lot. And once I started reading, I discovered that the story within was equally beautiful and enthralling.

Kathleen was famous not only for being the photogenic wife of grocery magnate George Eaden, but also for writing a true cookery classic in the form of The Art of Baking. Even though the book was published in the 1960s, it is still extensively being referred to today and can be found in the kitchens of many British households, so even much younger generations are familiar with Kathleen's delectable recipes.

A few months after she passes away, grocery chain Eaden and Son's is conducting the Search for the New Mrs Eaden. After nationwide auditions, the five people chosen to compete in the contest are young single mum Claire; polished Karen, who doesn't taste her own creations; Mike, a widower and father of two; Jenny, who is growing apart from her husband; and Vicky, who has stopped working so she can take care of her little boy, but isn't sure if she's happy as a stay-at-home mum.

I always enjoy reading novels that bring together people from different walks of life. I find that having such a diverse cast of main characters means there's always at least one with which the reader is able to identify, making it easier to be pulled into the story completely rather than just watching the action unfold from the sideline. In this case, I felt myself particularly drawn to Claire and Jenny, though I did feel sympathetic towards the struggles of all of them – Kathleen included.

Having such a large cast of characters did mean that there wasn't space to develop each one of them fully and as such I found some of the stories somewhat lacking. This was particularly apparent in the case of Mike, who was really only viewed through the eyes of his fellow contestants. I thought this was a shame as I would've liked to have known more about his life as a now single father. Similarly, the conclusions of Jenny and Karen's individual stories also felt a bit rushed.

Nonetheless, this was a delicious read, which I devoured like a freshly baked, homemade bread. The novel was steeped in a love for baking and quintessentially British delights, from the snippets of Kathleen's famous book scattered throughout, to the detailed descriptions of the contestants' practice runs and their entries into each of the stages of the competition. The lush descriptions of the food made them so vivid that I could almost taste them on the tip of my tongue while reading. So, even if you weren't hungry before picking up this novel, you definitely will be once you've dug into it!

The Search for the New Mrs Eaden, despite not taking place on television, is reminiscent of The Great British Bake Off and will be a particular treat for those who love the British baking show. However, even if you are not a fan of the reality contest, you will find plenty within the pages to enjoy. The characters do not only struggle with dough and flavours, but also with their marriages, parenting and the heartbreak of losing a child prematurely. For all the sweetness of the sugary decadences they whip up, there is also plenty of drama and intrigue to balance it all out.

And the baked goods mentioned within are so mouth-watering and inspiring that after finishing this novel even the most inexperienced of bakers will immediately want to grab their whisks and mixing bowls and try their hand at the recipes. From richly filled game pie with a perfect golden-brown pastry top to a delicate millefeuille layered with homemade crème pâtissière.