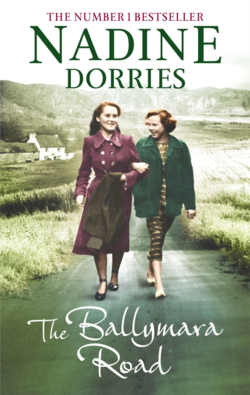 In the winter of 1963, Kitty Doherty gives birth to a son in an Irish convent. Only a select few know about the pregnancy – and who the father of the baby is. The baby is adopted by a wealthy American family and Kitty leaves the convent to stay with family until she can return to her home in Liverpool.

Back in Liverpool, the community is still reeling from the double murder of their local priest and one of their neighbours. Kitty’s family are amongst the residence of ‘the four streets’ where the murders took place and they know the truth of what happened. As the investigation continues, dark secrets begin to emerge.

The Ballymara Road is the last part in a trilogy and as I haven’t read the previous books (The Four Streets and Hide Her Name) I was a bit worried that I may find myself lost, but I found myself quickly settling into the story. There are a lot of characters within the book, especially as it takes place in Liverpool, Ireland and Chicago, and I did find myself feeling a bit overwhelmed to begin with. Perhaps if I’d read the trilogy from the beginning it would have made more sense. I also found the quick change in locations could feel a bit chaotic at times too, but I did enjoy the book on the whole. I loved the sense of community within the four streets, the strong family connections as well as the bonds between old friends. When tragedy strikes, you really feel the community rally round.

My favourite characters in the book were Maggie and Frank, who work at St Vincent’s convent. They are good people who are in an impossible situation and I really admired them as they tried their best to help as much as they could within the confines of their employment and home. I also liked Harriet, the new priest’s sister. When she first appeared in the book, I thought she was going to be a bit of a battle-axe but she proved me wrong and she was actually a kind and caring woman and I was hoping she would find the happiness she deserved.

There are some pretty dark themes within the book, some of which I wasn’t expecting, but I thought the book was a great read full of friendship and family loyalty. I could have done without the dialect within the dialogue throughout the book, but that is a personal preference of mine, regardless of the book.