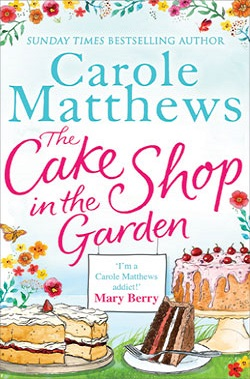 Forty-something Faye Merryweather is a kind-hearted woman who always takes care of everyone but herself. Her mother is bed-bound, though more out of stubbornness than necessity, and Fay is her sole caretaker. She does have a younger sister, Edie, but she lives in New York and is too caught up in her own life to consider the feelings of her sister and mother. The only reason she regularly Skypes Fay is to complain about her boyfriend and to beg her sister for money. Even though Faye barely scrapes by from the earnings of her cake shop, located in the garden of her home, time and time again she helps Edie out as she can't stand seeing her sister in distress.

Even Faye's long-time partner, Anthony, seems to only still be around for convenience as she makes him home-made meals, irons his shirts and yet rarely asks for anything in return. However, her nondescript existence is turned upside down when the gorgeous Danny Wilde sails into her life. Having recently walked out of high-flying city career, he bought a boat and is enjoying his new fancy-free life. Danny initially stops by The Canalside Cake Shop for a sandwich, but he sticks around to help out with some of the jobs that needed doing around the place for a long time.

Danny brings with him the spark that had been missing in Faye's life and she soon finds herself attracted to the much younger man. However, with her mother to take care of, the cake shop to run and not wanting to betray Anthony either, will Faye once again ignore her own feelings and desires for the sake of others?

I am a long-time Carole Matthews fan, as her heart-warming novels also manage to transport me from stressful days in the office to much nicer places, but unfortunately The Cake Shop in the Garden wasn't filled with the same the level of charm and delight I've come to enjoy and expect from her writing. For a large part this was a disheartening story of someone's life getting worse and worse, and the fact that the main character came across as a pushover didn't help matters either. After all, if Faye didn't seem to care about how awful people were treating her, why should the reader?

Also, for a novel that so prominently features cake on the stunning cover, and even in the title, there was a surprising lack of scrumptious foodie descriptions. There were some mentions of cake types and sandwich spreads, but I really missed the detailed descriptions of creating them that would make the smells and sights jump off the page.

Having said that, there was still plenty to relish within the pages of this novel (and I am not just talking about the mentions of Danny's well-defined abs, although that was certainly a plus!). Outspoken Latvian Lija, the young woman who helps Fay in the cake shop, was a feisty and brilliant character, and every scene that featured her was a joy to read. And the war veteran, nick-named 'Stinky Stan' by Lija, who visits the shop daily for a spot of lunch and calls whatever he is served his favourite, was a sweet addition as well.

So while this was perhaps not my favourite Carole Matthews novel, the smaller characters made this a worthwhile read in the end. I just wish the main character's actions hadn't been quite so frustrating from a reader's perspective and that the pages contained a little more cake. After all, there is no such thing as too much cake! Especially not in a novel that has the delectable treat featured not only within the gorgeous cover illustration but in its title as well.