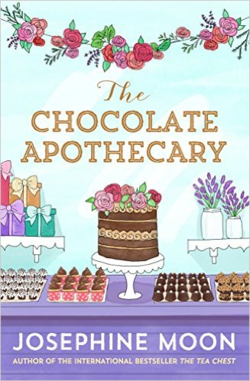 Christmas Livingstone is the owner of The Chocolate Apothecary in Tasmania, Australia. In her shop she creates beautiful, delicate chocolates, some of which she infuses with essential oils to help heal people. The Apothecary is Christmas' pride and joy, and following her 10 rules of happiness, which she created after being badly hurt a few years prior, she has convinced herself she has everything she needs and she doesn't have a desire for a family of her own, or even someone to share her life and passion for chocolate with. That is, until the scruffy-looking Lincoln van Luc makes an appearance in her shop.

The botanist has just returned from an exotic trip to the jungle and while he isn't looking for a romantic relationship either, he feels an instant connection to Christmas. The two are incredibly stubborn though and it takes interference from grandmothers, sisters and best friends before they're finally willing to give in to their undeniable chemistry. But with Lincoln possibly jetting off to the jungle at any given moment and Christmas convinced that she is better off alone, do the two really stand a chance?

I love the beautiful cover of this book so much! It's one of those books where, upon receiving it, it just brought a smile to my face. And the pale pastel colours, not to mention the scrumptious chocolates depicted, perfectly match its sweet contents too. Christmas was a lovely protagonist who was easy to relate to – even though her final rule to happiness sounded a little too extreme a precaution to take after one terrible heartbreak. Still, it worked for her for quite a few years and she genuinely thought that it had made her happy, until Lincoln's arrival threw that belief out of the window. Their romantic entanglement was somewhat predictable, but that didn't make it any less heart-fluttering.

However, while the main romance had me gripped, the other storylines suffered along the way as they didn't have the chance to properly develop. From Christmas' intention to help people in her role as fairy godmother to the search for her biological father, none of these felt like they received enough page time or a satisfactory conclusion, which was a shame after getting really invested into Christmas' life throughout the novel. In addition, her connection with stepfather Joseph was conflicting as at times she felt he abandoned her as a child yet at others she praised him for being a real father who was always there for her. A little more attention to the people surrounding Christmas and Lincoln could've elevated this novel from a predictable yet delicious tale to a genuinely engrossing and memorable read.

Just like the confectionery adorning its cover, The Chocolate Apothecary is stunning on the outside and sweet, if a bit too gooey, on the inside.