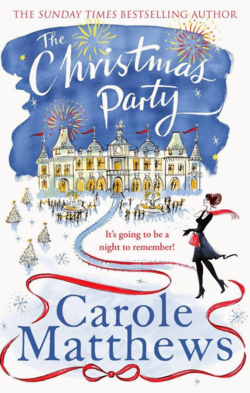 The latest Christmas offering from British author Carole Matthews focuses, as the title might give away, on a party taking place during the festive season. It's the annual Christmas bash of Fossil Oil and this year's event is going to be bigger and brasher than ever before as it's a swanky fully-catered affair taking place in a grand manor.

As so often is the case at work parties, especially when there's a free bar to be abused, the stunning decor isn't the only thing that will make it a memorable night for the employees. With romance lingering in the air, redundancies in the pipeline, affairs uncovered and a drunken magician on the lose, this year's Fossil Oil Christmas party is set to become the most outrageous one yet.

It is no secret that I am a fan of Carole Matthews, dubbing her The Queen of Christmas after reading the amazing All I Want for Christmas a few years ago. So when I heard a new festive title would be in the cards for her this year, to say I was excited would be an understatement – I felt like a kid on Christmas morning.

I was surprised then that when picking up this novel that instead of instantly feeling like I was enveloped in a cosy Christmas atmosphere and an abundance of glitter, I found the story a little slow to begin with. While initially mainly focusing on new employee Louise Young, personal assistant to one of the company's top salesmen, Tyler Benson, there were a lot of character introductions in quick succession.

The chapters of Kirsten Benson and Melissa Harvey in particular, both wives of Fossil Oil top men and both unhappy in their marriages, were a bit interchangeable at first and it took me a little while to be able to tell them apart and see them as separate characters who each with their own stories to tell.

Thankfully, when the party got underway, the various storylines became more defined and I felt myself becoming truly invested in each one of them, particularly single-mum Louise and the struggle with her flirty, almost creepy, boss Tyler and the tentative steps into a sweet romance with her colleague Josh Wallace.

As the evening progressed, some of the events escalated into completely unforeseen territory, making this an incredibly exciting and gripping read. While at first several of the women at the heart of the story seemed to lead a life that was perfect on the outside and in which all that was demanded from them was to look pretty, it turned out they had a lot more depth to them, a lot more heartbreak too, and that they were the ones really running Fossil Oil; not the male figureheads.

I was well and truly invested into the lives of Louise, Melissa and Kirsten towards the end and actually felt disappointed when the story finished, almost abruptly. The paperback edition of the novel includes a sneak peek of Carole Matthews' next novel that is several chapters long, so the book's page numbers made me wrongfully assume that The Christmas Party was longer than it ended up being.

Not as doused in an undivided love for Christmas as Matthews' previous festive reads, this novel is more about power plays within large corporations, the empowerment of women and of course the true power of romance. It's an inspiring read for women everywhere and in particular those that struggle either with their career or love life; it's never too late for a fresh start and to find your happy ending.