The Christmas Promise by Sue Moorcroft reviewed by Kay Brooks 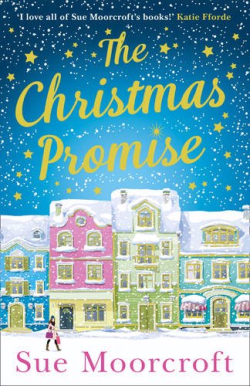 Bespoke hat maker, Ava Blissham, isn’t a huge fan of Christmas. Her parents didn’t celebrate it when she was a child and the only person that did try and make the season special for her, her grandmother, has passed away. To add to her dislike of the season, she’s struggling financially and her ex-boyfriend is attempting to bully her into giving their inevitably doomed relationship another try. Then she meets Sam who commissions her to make a hat for his mother, a special lady who is having some troubles of her own. Ava doesn’t want to fall for anyone; she has enough to deal with, but that doesn’t stop Sam from trying to win her heart.

Ava is a quirky character, who is small but feisty. She clearly knows how to fight her corner and survive, especially since her parents are the only family she has, and they have moved to France to run a bookshop. Despite this, her ex-boyfriend, Harvey, is causing problems she does not know how to solve. During the happy days of their relationship, Ava allowed him to take photos of her wearing her bespoke hats and not much else. Now, with Ava refusing to give him a second chance, Harvey is resorting to threatening her with making the photos public. This is the first time I have read a book that has dealt with the crime of revenge porn, although I was aware this has become more of an issue in modern society. Moorcroft deals with this issue in a sensitive, honest way, exploring the feelings of those affected. Ava worries that the photos will make people question her moral compass and, while it isn’t an area I have given much thought to, I hoped that the other characters would be able to give her the support I would want to offer.

The storyline mainly focuses on Ava and Sam, but there are also a few memorable, engaging supporting characters. Wendy, Sam’s mother, is inspirational. Her background story is a heart-wrenching one of survival and, in the present, she is once again fighting for her life, but this time against cancer. She is a representative for women who have been abused by men and her kindness really tugged on my heartstrings. Izz, Ava’s best friend, is socially awkward and insecure, moving between crushes regularly, without expecting any reciprocation. Tod, their mutual friend, is a comic geek who works with Izz and Sam. He feels so lucky to have a girlfriend at all that he is willing to overlook her domineering, sometimes rude nature. All the characters experience some form of interesting growth throughout the novel.

This is a well-written, wonderfully seasonal read, with plenty of alternating tear-jerking and heart-warming moments. I read it in a few days, not being able to put it down for long. The action moves at a good pace and the ending is pleasingly satisfying.

FIND OUT MORE ABOUT THE CHRISTMAS PROMISE