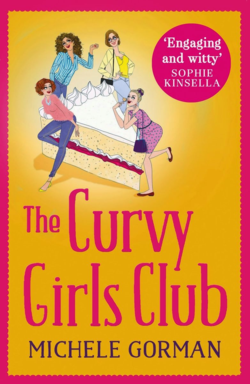 Friends – Pixie, Ellie, Katie and Jane – have started to resent their lives revolving around being weighed, dodging carbs and counting calories at Slimming Zone. Wanting to change their focus and find happiness in other areas of life, the women decide to create a club where the focus is on fun and not being fat. As the Curvy Girls Club grows in popularity other issues start to interfere with their success. Romances blossom, career paths alter and friendships are threatened. If the club is to survive and flourish, the founders must discover the key to self-confidence.

The start of the novel introduces four women struggling with their weight who are quickly losing confidence through trying and failing at every fad-diet going. Their decision to quit the club and spend their time pursuing other interests, such as the theatre and cooking classes, is originally a plan to build on their friendship. When others, also sick of feeling unhappy with their self-image, start to show an interest, the Curvy Girls Club is born. Now the four women, used to being marginalised for their weight, are seen as being inspirational for overweight people everywhere.

At first I struggled to differentiate between the different voices as all the characters seemed to think alike, but as issues outside of the club became apparent, the voices grew more distinctive. Katie is the insecure narrator who is constantly overlooked at work both by her boss and her gorgeous colleague, Alex, who she has fancied for six years. Pixie, opinionated and strong as she seems, is struggling to find the strength to leave her verbally abusive husband. Ellie may have found the love of her life but her insecurities and jealousy are threatening to drive him away. Jane is willing to try anything to lose weight despite the health risks. I found Jane the hardest to get to know as she seems to be the least featured.

There’s so much fun and laughter in this book as well as heartache. I really enjoyed it and struggled to put it down. It does deal with the negative treatment often dealt with by larger people and the effects of this but the characters remained dignified, unlike in other books or films where overweight people are ridiculed. The friendships between the women are tested as they deal with jealousy when one member of the group starts to lose weight, disagreements over radical dieting solutions and power struggles when the club starts to become a business. For me, this all helped with the realism as none of the characters are perfect. The fact that their mistakes frustrated me shows how much I grew to care about them.