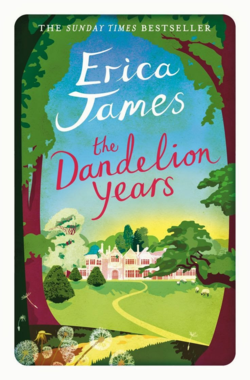 Saskia lives with her father and two grandfathers in the idyllic Ashcombe. Her mother and grandmothers died in a car crash when she was just 10 years old, so despite now being in her early thirties, her remaining family members are everything to her and she can't imagine living away from them. Her father owns a second-hand bookshop and Saskia spends most of her working hours in solitude, restoring battered books to their previous glory, before going home to her family.

One day when going through a box of old books, she comes across a big family Bible. It doesn't look like anything special from the outside, but for some reason Saskia decides to check it more thoroughly and she soon discovers an old notebook hidden within a secret space. The scribbly writing is hard to decipher at first but when she does, she gets pulled into a beautiful love story of two people working at Bletchley Park during the Second World War.

Bletchley was of course the centre for the UK government's code breakers during WWII, but though that is an intriguing storyline in itself, the memoir within the notebook isn't focused on this part of history; it's simply the backdrop for the heartbreaking love story of the diary's author and his Katyushka. Theirs runs parallel to a tentative romance in the present; between Saskia and Matthew, a man connected to the notebook's author. This added a really interesting, contemporary touch to an otherwise historical novel.

The Dandelion Years felt very much like Jojo Moyes' The Girl You Left Behind meets The Imitation Game. The dual time-frame narrative I'd fallen in love with in Moyes' novel worked exceptionally well, creating a captivating novel that I literally could not stop reading. In fact, when it was time for me to go to bed I thought to myself, 'just one more chapter', and before I knew it I had read the remaining 200 pages of the novel! This book is a hefty one (my proof copy numbers 539 pages), but I felt myself so engrossed in both stories within that the length didn't bother me in the slightest.

I loved the setting of Bletchley Park, which is of course a significant location from British history and with the recent release of Oscar-nominated film The Imitation Game, the backdrop for this novel has become even more iconic. Though not focusing on well-known scientist Alan Turing, the excitement of what the people at the park were working on still rippled through the novel, adding an element of mystery and intrigue to the already beautiful story of (forbidden) love.

The present day romance was slightly less gripping at first, but as soon as Matthew and Saskia meet their chemistry is evident and it was an exciting journey to discover whether they were able to overcome the many obstacles in their way. The two timelines were very well-balanced and as the story became more gripping with each passing page, this was one novel for which the phrase unputdownable is created; not only due to the enthralling story, but also because of the exceptional way it was written.

The Dandelion Years is a stunning treat for fans of historical and contemporary novels alike. It was my first Erica James, but after having the pleasure of reading this elegant and beautiful story it definitely won't be the last.