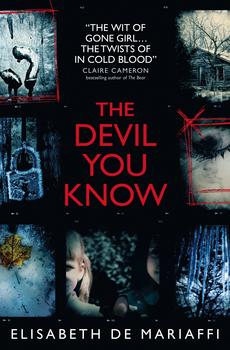 Lianne Gagnon disappeared a week after her 11th birthday – she went to a running practice and never came home.  No one was ever arrested. Eleven years later her best friend Evie is working as a rookie crime reporter, when a new case stirs up memories of the past – memories which are never that far below the surface. And a man is appearing at her window. Is she obsessed or is someone really out to get her?

First of all, I’m a big old wuss – I don’t like horror (books or movies) and creepy thrillers aren’t my usual reading matter. I have a day job that can be a little… depressing at times, so my reading tends to be more escapist happy-ever-after, rather than psychological thrillers. But I’m game for anything – and took a few elementary precautions – I read this during the day and mostly in nice, bright sunlight. And it was still really creepy, but I couldn’t put it down.

It is really hard to work out where Evie’s paranoia ends and reality starts. For me, Evie’s job as a crime reporter is a really stupid move for someone with her past, but everyone around is telling her that, which makes it easy to buy into her stubbornness. Add to that the fact that in the early 1990s it was really easy to be out of contact and disappear, and it gets tense enough to make you jump when you hear an unexpected noise.

This is a novel full of suspense and tension – I was gripped. It’s smart and really cleverly done – disorientating and confusing as you try and work out what is actually happening, and what is in Evie’s imagination. I can’t say that I was 100 percent happy with the ending, but I can’t explain why without giving too much away! Definitely worth a look if you like the genre – but consider reading it on the beach, where there are no dark corners!