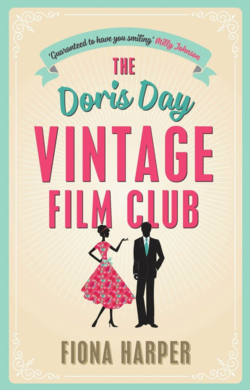 The Doris Day Vintage Film Club follows Claire Bixby, who works as a travel agent specialising in romantic destinations, which is ironic considering the fact that she's having no luck on the romantic front herself! Still, she's happy with her job and her friends, with whom she shares a love for actress Doris Day and so they regularly meet up for film evenings to relish the back catalogue of the inspiring woman.

The one thing not going according to plan in her life, after not yet finding a man to share it with, of course, is her annoying downstairs neighbour who has reappeared and is being really inconsiderate; leaving a bike where she can trip over it and even stealing her milk. She spends an aggravating time exchanging notes with the man who becomes more rude with each passing message. But when Claire finally seems to have met a serious contender for Mister Right, not even her neighbour can get her off her happy cloud.

I'm very fond of novels that group together women of all ages as they meet over a shared passion after reading similarly structured such as The Vintage Tea Club by Vanessa Greene and The Meryl Street Movie Club by Mia March, which both were excellent in their execution – so The Doris Day Vintage Film Club had a lot to live up to! Unfortunately this one was was more focused on Claire and her storyline, rather than than dividing it more equally between the women attending the film club, so while the novel's title is certainly enticing it was a bit misleading.

When the women were grouped together in scenes, however, they were certainly the strongest ones within the book; their friendship really shone off the pages and created a heartwarming and diverse story. I did like Claire and her progress throughout as well, but I found her connection with Nick a tad too predictable. Sure, there were some ups and downs thrown at them but ultimately the storyline was pretty obvious from the beginning and that is why I probably favoured the scenes with Kitty, Abby and the rest of the Doris Day Film Club.

Still, if you're looking for an escapism read to pick up on your next holiday or for a lazy Sunday afternoon at home, then The Doris Day Vintage Film Club will definitely be able to sweep you away to sweeter and simpler times.