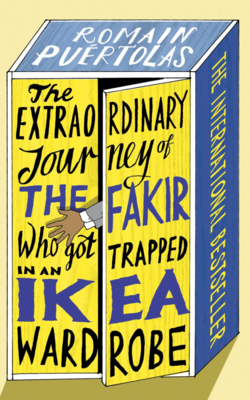 Ajatashatru is a professional con man from India, tricking those in his village into thinking he has magical powers. After the village raises enough money, Ajatashatru travels from India to Paris where he plans to buy a bed of nails from Ikea. He has little more than the clothes he is wearing and a fake 100 euro note when he arrives as he will be returning to India the following day. But, after finding himself trapped in an Ikea wardrobe being transferred out of the country, Ajatashatru begins a journey across Europe and beyond instead.

As well having a mouthful of a title, The Extraordinary Journey of The Fakir Who Got Trapped In An Ikea Wardrobe is a fun, quirky book that is full of humour and incredible scenarios. Many of the scenarios are pretty far-fetched but I found the book so charming and amusing that I didn’t mind at all and just went with it. Although Ajatashatru is a con man who has spent his life tricking the people of his small village, I couldn’t help warming to him immediately. Despite being almost forty, I found him to be a naïve, almost child-like character and I was constantly on his side as he found himself in increasingly sticky situations. I wasn’t sure how I would find the book to begin with as it really is quite quirky but I soon began to love the style of writing and couldn’t wait to see where Ajatashatru would land up next.

The Extraordinary Journey of The Fakir Who Got Trapped In An Ikea Wardrobe is such a fun read with plenty of laugh-out-loud moments but there are also some touching moments and those with a more serious message. I enjoyed the book immensely, with its wacky humour and, of course, our fascinating hero Ajatashatru.