The Food of Love by Amanda Prowse reviewed by Susan Lobban 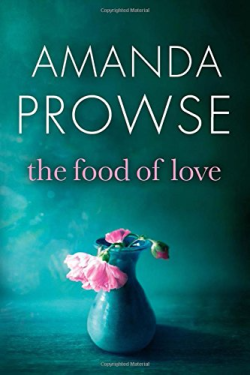 The Braithwaites may not have lots of money but one thing they do have is each other. A close family is priceless and Freya prides herself in how well she knows her husband and two daughters. Until that is one day she is called into school to talk about her youngest regarding concerns the headmistress has. As a mother her first reaction is one of disbelief, however once she really looks at Lexi she realizes that she has been changing right under her nose and Freya has missed it.

As Lexi peels away the layers of clothing she reveals the true extent of her weight problem but Freya is convinced that she can rescue her daughter before any real damage is done. Pushing aside her husband and eldest daughter she is blinkered to the fact that Lexi needs more than a few home cooked meals. Will a mother’s love really be enough to battle such a cruel disease?

As with all of Amanda’s books I started this book knowing nothing about the main topic of the book. This time it was Anorexia which of course I have heard of but not in any great detail. I had not read the synopsis before starting this book, but as I know the nature of Amanda’s books I guessed that was where the story would be headed. What followed was a very convincing portrayal of a family ripped apart by something out of their control. Each time I read one of Prowse’s books it piques my interest to read more into the facts behind the fictional families’ dilemmas.

Usually Amanda’s female protagonists are strong and relatable however this time I found Freya to be extremely weak and bordering on unlikeable. However this did not make her any less readable as I believe a lot of mothers would react in the same way but when she shouldered some of the blame due to her past actions I tended to agree with her. Lockie was who I admired and related to as even though he was sidelined by his wife he kept trying to assert his fatherly opinions and he could clearly see Freya’s approach was far too softly softly.

Like or loathe the way the Braithwaites handle their daughter’s problems it certainly makes for fascinating reading. I stayed up far too late into the night to see what would become of Lexi and if her family would survive the trauma they were facing. Amanda Prowse has a remarkable gift of choosing topics that leave her reader desperate to share with others. I think this is part of her ever growing success as I find you can’t read one of her books without mentioning and recommending to everyone you know!

FIND OUT MORE ABOUT THE FOOD OF LOVE