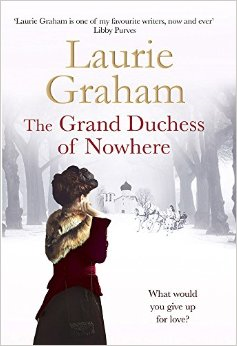 Ducky, the titular Grand Duchess, is Princess Victoria Melita – through her father she’s one of Queen Victoria’s many granddaughters but through her mother she’s a granddaughter of Tsar Alexander II. Her story takes you from a minor German princedom to a ringside seat as the Russian revolution gets underway with terrifying consequences for Ducky and her extended family.  But it’s also an unusual love story – as Ducky fights back against “Grandma Queen’s” obsession with marrying off her descendants and tries to manipulate royal protocol to get her man.

These machinations eventually take Ducky to Russia and of course the last Empress  – Sunny – is another cousin.  This means that Ducky is always hovering around the outside of the Imperial inner circle, leaving the reader perfectly placed to get the inside scoop on the dying days of the Romanovs.

Reading Ducky’s story is like having a chat with a friendly (and possibly slightly drunken) old lady that you got talking to at a cocktail party. She’s witty, a little bit indiscrete and not particularly politically astute. I’ve no idea how much of it is truth and how much is invention – but it is wickedly entertaining reading.  There’s a large cast of supporting characters – Ducky’s extended family is sprawling, complicated and rife with nicknames. But it’s a testament to Graham’s writing that I only had to refer to the family tree at the front twice – on both occasions near the start of the book.

I’ve read quite a few of Laurie Graham’s novels and my favourites are the ones, like this one, which take a sideways look at history – you know how it is going to turn out but it’s a lot of fun finding out how you get there. But The Grand Duchess of Nowhere more than that – Ducky is not just a not-entirely-disinterested observer of the downfall of the last Tsar, she’s also got an interesting story of her own as she tries to make her mark in the world.  This isn’t my favourite Laurie Graham novel – that title still belongs to Gone With The Windsors – but it runs it pretty close.