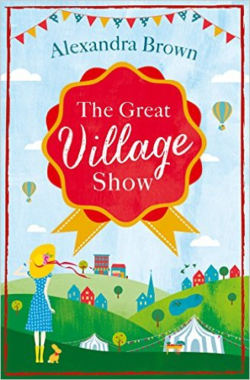 Sometimes reading a book is like a great, big hug. Alexandra Brown’s books, set in the gorgeous country village of Tinderdale, really epitomise that feeling.

The Great Village Show is one of my most anticipated book releases of 2015. Whilst other people were getting themselves into a tizz about the new Harper Lee, I was waiting with bated breath to find out what happened next in the lives of Tindledale’s residents.

Everyone is back for this, the second book of the series set in the fictional village of Tindledale, including Sybs, Basil and Dr. Ben, who were the main characters in The Great Christmas Knit Off, released last year. But this time the book shifts to the perspective of another village resident, Meg, the acting headteacher of the village school.

Meg is in need of a project, something to focus her energy on now that her only son, Jack, has flown the nest for university and life on her own has become quite, well, quiet. However, Meg might be reminded of the old adage ‘be careful what you wish for’ when she finds her small village school under threat of closure. To help boost village morale, Meg has agreed to organise the annual village show and suddenly there is a new, infuriating presence in her life in the form of dishy (excuse the pun) celebrity chef, Dan Wright, who has mysteriously appeared in the village despite the fact that he loathes the countryside. To say that Meg and Dan don’t get off to the best start would be an understatement but soon, as they bond over food and drink planning for the village show, things start to sizzle between them.

At this point I should mention that you don’t have to have read The Great Christmas Knit Off to enjoy The Great Village Show; it works perfectly well as a standalone novel, but I think you’ll find yourself wanting to read it afterwards. All of the beloved characters from the previous book appear, some more briefly than others, and contribute to making Tindledale stand out from the crowd. They are all determined to make it into the top ten villages list in the national press in the hope that it will save the village school and bring some much needed new blood to Tindledale.

When I first read The Great Christmas Knit Off I fell in love with not only the characters, but the village of Tindledale itself. I know it’s only fictional, but I dream of a place like this where everyone is nice to one another, there’s a lovely community spirit and riding everywhere on a bicycle is the norm. There is something so comforting about the world that Alexandra Brown has created and the characters are kind-hearted and well-written. The Great Village Show is delightful and comforting. I only hope I find my own Tindledale one day.