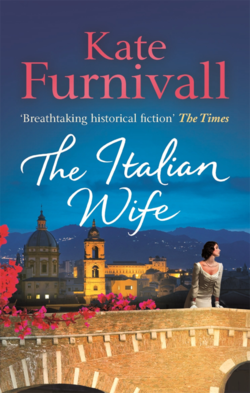 Isabella Berotti is one of the few female architects employed to work on one of the new towns, Bellina, on Italy’s Pontine Marshes in the early 1930s as part of Benito Mussolini’s grand plan. She focuses all her attention on her work relishing the development of the town being built on the once mosquito-infested marshland that he has ordered to be drained. Isabella has been haunted for the past ten years since her beloved husband, Luigi, a blackshirt and devoted follower of Il Duce, was shot and killed. Maimed in the shooting, Isabella lost the child she was carrying and has been left with external and emotional scars as well as nightmares that won’t leave her. On the tenth anniversary of the shooting, she goes to the town square in Bellina where a woman stops her and whispers something to her before asking Isabella to look after her small daughter for a short while.

Moments later the woman is dead and from then Isabella’s life changes. She has been left with a child, Rosa, who for some reason the authorities believe to be holding vital information. No-one knows who to trust in the Fascist ruled country and as Isabella is compelled to discover who shot her husband, and herself, she battles to help the small girl who is forcibly taken from her and locked away in a convent.

Roberto Falco, a photographer with a mysterious past who has been employed to capture images of the creation of this new town, photographs the dead woman. He and Isabella come across each other soon after the woman's death and are drawn together trying to find a way to rescue Rosa. They strive to discover who is behind the child's incarceration and fighting to keep Isabella away from the small girl.

I loved everything about this book. From the hatred felt by Isabella towards her husband’s killer and the person who took her life away from her, to her friendship with Roberto and her connection to Rosa. The sense of unease, mistrust and fear resonates throughout this story, but there’s also a deep need to believe in someone and for Isabella to overcome the ghosts that haunt her, so that she can move on from the tragedy she experienced a decade before. This book is so much, a thriller, a romance and also a book that taught me about a piece of history that I hadn’t known existed. I relished every sentence of this vivid, compelling story.