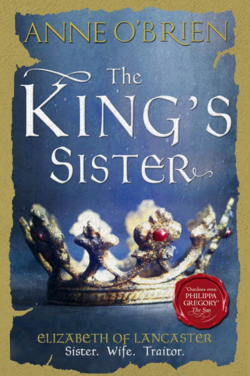 Elizabeth of Lancaster is seventeen when she marries the eight-year-old Earl of Pembroke as part of a political alliance organised by her father. Elizabeth is maturing into a passionate young woman while her new husband, John Hastings is just a child who is interested in little more than fooling around with the other young members of the household and his animals. So when Elizabeth meets the king’s half-brother, John Holland at court, she quickly falls for his charms. John Holland is a grown man who has fought heroically in battles and is well known as a seducer of women. Although Elizabeth knows of John Holland’s reputation, she can’t help falling in love with him, even if that means betraying her family.

I immediately felt for Elizabeth as she is forced to marry the young John – or Jonty, as he is known in the book – and I could feel her frustration and humiliation at the pairing. Elizabeth is hoping for a passionate match, but instead she is bound to a young boy who she will be married to only in name for quite some years. So I wasn’t surprised when she started to fall for John Holland; he is strong, intelligent, brave and, most importantly, an adult. I did think their relationship with John was quite drawn out and although I appreciate that the author is following actual historical events, I felt that the pace was far too slow for me. While there is a lot going on – marriages and death, political alliances and plots – it seemed rather sluggish and longwinded at times.

That being said, I did like Elizabeth and thought that she was a determined young woman who knew her own mind, even if she was constricted by the rules of the time. I also thought that there were a lot of powerful emotions within the book, from the passion between Elizabeth and John and the sometimes heart-breaking consequences of life at court. Tension built due to the twists and turns of plots and scheming, which kept my interest as I wondered what the outcome would be for Elizabeth, John and the others involved.

The King’s Sister is about love and passion as well as betrayal and, pacing issues aside, I enjoyed the book.