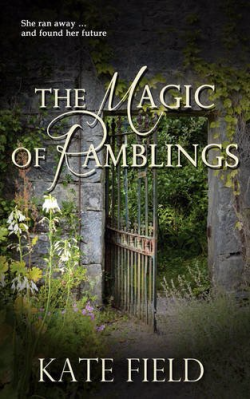 Cassie is hiding from something, or should I say someone. She's sad, lonely and scared and wants to hide herself away from life. Fitting her belongings into one bag she fakes a reference and manages to get a job as a companion to Frances Smallwood, a fragile, but determined older woman. Frances hasn't left her beautiful home for years apart from going to church. She's pretty much ignored by her three grown up children and would be alone if it wasn't for her hairdresser, housekeeper, and doting nephew, Barney.

Like Cassie, Barney has had his fair share of heartache and has come to Ramblings to get away from the shambles of his life. He's brusque, angry most of the time and suspicious of people he doesn't know. So when Cassie moves into the large house and takes over caring for Frances – a woman with her own secrets – he's unimpressed and determined that her visit won't last very long. Underneath his bearded face and scowl he's more handsome than Cassie expected. Despite her insistence that she keeps herself to herself, Cassie ends up becoming more involved in the lives of those people around her in more ways than she, or they, could have expected.

I loved this book and couldn't wait to discover exactly what had happened to Cassie and how she and Barney were going to resolve their differences. Frances was also a fascinating character with obvious sadness in her life that she was keeping to herself as well as her difficult relationship with her children. I spent the entire weekend thoroughly involved with the three of them, with Cassie's fight to move on from her past, and her battles with Barney. Barney… what a gorgeous hero! Looking forward to reading Kate Field's next book.

MORE ABOUT THE MAGIC OF RAMBLINGS