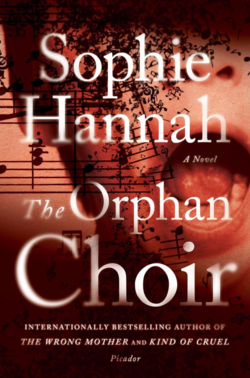 Louise is grieving for her son. But Joseph isn’t dead. He is at a prestigious boarding school for extraordinary choir singers. She should be proud like her husband but she feels bereft at his absence. Not sleeping is making it worse but her neighbour, aptly nicknamed Mr Fahrenheit, insists on keeping her awake with his loud music and regular parties. When Louise spots an advert for homes in a gated country reserve, she immediately grasps the opportunity. Strangely though, the music seems to have followed her but now it is choir music, sung by an invisible group of children. Has Louise lost her mind or is something more sinister at play?

Sophie Hannah’s crime mysteries never fail to completely ensnare me and I often find myself unable to put her novels down until I find out who the culprit is. This horror novel demonstrates Hannah successfully stepping out of her chosen genre. Anyone who has ever had an issue with an inconsiderate neighbour will immediately be able to sympathise with Louise. She desperately misses her son and her husband is completely apathetic to both her feeling of loss and the misery being caused by Mr Fahrenheit. Louise is a typical Hannah character; she is deep and insightful. Her observations are often witty and occasionally disturbing. As she questions her sanity, I was alongside her wondering what was real and what she was imagining. The concept of having an unreliable narrator only serves to create more tension and raise more questions.

The novel is classified as a ghost story but fanatics of this genre may be disappointed as the majority if the novel is building up towards the climatic end. For me, the main appeal of Hannah’s writing is the psychological suspense and that is definitely there. There are lots of little oddities scattered through the novel that made me think that can’t be right and something strange is going on here. The front of the novel compares it with Woman in Black by Susan Hill. The Orphan Choir is not as consistently creepy but it does have a modern Gothic feel to it and the ending is certainly harrowing.

As a first novel in this genre, I found it successfully disturbing and hope Hannah continues to experiment in this area. Having said that, I would miss detectives Zailer and Waterhouse far too much if she gave up the crime genre! I would advise anybody who is first encountering Hannah’s writing to start with Little Face. I’ve been hooked ever since!